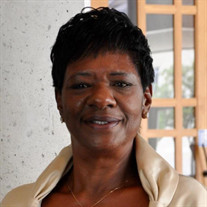 Our precious mother, Magnolia Easley Nash, also known as “Mackie” was born on January 2, 1949, to the late Orange Sanders Easley Sr. and Mary Elizabeth Jones Easley. She was the youngest of 13 children. Magnolia was a resilient, spirited and gifted child. She was raised in a Christian community at the Church of the New Testament, as her parents strived to implement, in all their children, a strong faith and belief in our Lord, Jesus Christ. She attended school in Manor and graduated from LC Anderson High School, in Austin, Texas. She continued her education at Huston-Tillotson College and Austin Community College in Austin. While attending college, she met Lois “Sonny” Nash. She and Lois married on January 1, 1972. They were blessed with three beautiful children. Magnolia was employed with the state of Texas at Austin State Hospital for many years until she experienced a disabling job injury. She genuinely enjoyed working with special needs children at the hospital. During her state tenure, she was instrumental in developing training guidelines used by the staff. Magnolia was passionate about music. She was blessed with the gift of playing piano “by ear” and taught herself to play at an early age. She used her gift to play for various churches in and around the Elgin community whenever her services were called upon. She also loved cooking. Magnolia developed her own special seasoning. Her secret creation could be used on any dish. She was a Whole Food enthusiast, routinely spending hours shopping and planning organic meals. She enjoyed gardening, a skill and joy passed down from her parents. She also liked to share her knowledge with family and friends about the healing attributes of herbs and provided them with her special horehound tea. She loved her family dearly and enjoyed spending quality time playing dominos or spades. On June 22, 2021, Magnolia Nash was called home to be with her Heavenly Father. Magnolia was preceded in death by her beloved infant daughter, Ruth Renee Nash, her parents, Mr. & Mrs. Orange Sanders Easley Sr, and her siblings, Wilbert Easley Sr., Dorothy Nell Anderson, Margaret Evans, Emma Jean Dixon, Irey Mae Woods, Georgia Franklin Mitchell, and Elizabeth Ann Bedford. Magnolia is remembered with love and leaves to cherish her memory by her two children, who made up the entirety of her world. Draean DeKeith Nash (Liza) and Kanethia Detrice Spencer (Robert); two stepchildren: Jefferey Nash and Barbara Nash: four grandchildren, Jonathan Troy Smith II (Kalah), Komanya Dakahri Smith, Dariyon Andrew Nash and Journee Symone Nash; one great granddaughter: Nylah Ma’Kaiah Smith, one brother: Orange Easley Jr: four sisters: Girtha Billingsley, Hester Rae Jackson, Ester Mae James, Bernadette Cavanaugh and a host of relatives and close friends.

Our precious mother, Magnolia Easley Nash, also known as &#8220;Mackie&#8221; was born on January 2, 1949, to the late Orange Sanders Easley Sr. and Mary Elizabeth Jones Easley. She was the youngest of 13 children. Magnolia was a resilient,... View Obituary & Service Information

The family of Magnolia Nash created this Life Tributes page to make it easy to share your memories.

Send flowers to the Nash family.