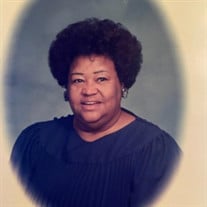 Not sure what to send?

SUNRISE OF THE SONGBIRD MILDRED FAYE PROSSER While enjoying the melodic sounds of his lyrical beings, God looked over the earth, He knew that the earth needed more of these nurturing notes to enhance the human soul’s experience, as in that moment, he saw a need for music to feed the soul of his children during a heightened climate season. Fluttering near his throne a little songbird said to the Lord, “I can do it Father, here am I, send me”. God smiled and said, “And so it shall be”. It came to be that in the summer season in the month of June on Tuesday, the nineth day, in the year of our Lord 1941 the little songbird transitioned to become the sparkle of her parents’ eyes, Willis Neal Sr. and Ima Jenkins Neal, thereby naming her Mildred Faye Neal. “Faye Baby” as she is lovingly known, took her place in the musical family to which she was born, learning to sing and play the piano as a young child. Faye’s family formed a singing group, aptly named, The Neal Singers. To promote their musical programs, they would drive through neighborhoods using a megaphone to announce, “The Neal Singers are here! The Neal Singers are here!” This talented group consisted of her siblings, Elvera (transitioned), (Faye herself), Sylvester, Carl (transitioned) and Ima. Her other siblings, Willis Jr., Grover, James and Curtiss were not in the group and have all transitioned on. Fluttering from note-to-note Faye sang the school songs at Kealing Jr. High School and LC Anderson High schools’ pep rallies. Besides singing, Faye was also a fashionista who loved to sew and design her own clothing, home decorating and cooking, gardening – raising greens, tomatoes, and okra, she also made peach and pear preserves. For fun, Faye played and coached softball as well as watching all sports on television and playing dominoes. This songbird Faye continued to hone her musical talents as a musician who fluttered to several churches within Austin, Amarillo and Borger, Texas and Los Angeles, California. Other than being a serial entrepreneur in restaurant industry and working as a church musician, Faye also worked for State Farm Insurance Company, Least Restrictive, Austin Independent School District (AISD) and Child Inc. In the Austin Gospel Community along with her brother the Reverend Carl Neal, Faye was well known for their special sounding duets. Both were musical powerhouses. The same harmonious sound was shared with Faye’s husband Harvey Prosser, Sr. As the songbird was gifted in teaching her musical students how to sing the lead of gospel songs, she would often tell them when teaching background parts, “The voice I teach you is the one you keep, I don’t care what you hear somebody sing next to you.” “Don’t steal nobody else’s voice, hence, she received many flowers of gratitude from some of those whom she gave first opportunity to lead a song and share their singing talents. In the winter season of December on Saturday the eighteenth day in the year of our Lord 2021, Faye once again transitions from earth returning to her heavenly place leaving a musical legacy and life to be celebrated by her children, Tranea Prosser, and Harvey Prosser, II. Her grandchildren Aubre Hunter (Kendrick), Detren Scales (Briana), four great grandchildren, Brother - Sylvester Neal, Sister - Ima Jones, Sisters in Love - Bobbie Neal (Rev. Grover Sr. transitioned) and Edna Neal (Rev. James “Pocket” transitioned), Della Neal (Willis Jr, transitioned) and Shirley Neal (Curtiss transitioned) and one Brother in Love - Sylvester Prosser. Her many nieces, nephews, first cousins will have many memories to cherish of this songbird for years to come. Faye’s Siblings who have transitioned including her oldest sister Elvera Neal Marshall no doubt met her with a song and smile.

SUNRISE OF THE SONGBIRD MILDRED FAYE PROSSER While enjoying the melodic sounds of his lyrical beings, God looked over the earth, He knew that the earth needed more of these nurturing notes to enhance the human soul&#8217;s experience, as in... View Obituary & Service Information

The family of M. Faye Prosser-Perry created this Life Tributes page to make it easy to share your memories.