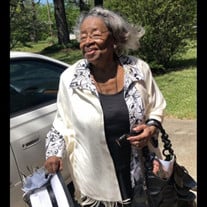 https://www.flipsnack.com/alcbf/booklet-program-luzenne-bradley-1.html A Glance at Mom’s Life Luzenne Davis-Bradley was born on November 23, 1928 in Jack Nash (Brickeys), Arkansas, to the proud parents of Jack & Fannie Mae Taylor. She departed this life, at the age of 92, on Sunday, December 20, 2020 at 11:30pm. Luzenne and her sister, Lucy Mae, were raised by Fannie and Humphrey “Papa” Kitchen. Papa played a very intricate role in the rearing of Luzenne & Lucy Mae. At the age of 12 she accepted Christ and was baptized at Shady Grove Missionary Baptist Church. Luzenne was a PROUD member of the Class of 1950, Robert R. Moton High School, Marianna, Arkansas. She remained active and close to her classmates until her death. Later in her adult life she moved to Marianna and united with Paradise MB Church under the pastoral leadership of Rev. Adams, presently under the pastoral leadership of Rev. E.H. Garrett, where she remained until her death. Mom was active in many church functions and was a true believer and truster in the Lord. In 1950, Luzenne married Robert Reed. In 1958 she married Henry Arvella Davis, Jr and together they nurtured and raised five children: Helen, Myra, Henry III, Michael & Sandra. Arvella preceded her in death. In 1990 she met and married Ernest Bradley who also preceded her in death. With the passing of her sister in 1976 Luzenne became a mother figure for Lucy Mae’s four children (Verdell, Vernal, Dalemarie & Willard). She was there for them along with raising her own five children. Luzenne was a very busy lady, spending every possible minute working in her BEAUTIFUL yard and flower gardens. She never hesitated to give directions to her Yard Man on how to or not to cut her grass and telling him to never put a riding lawn mower on it. When she wasn’t out in her yard you could always find her in the kitchen baking cakes or cooking for so many. In her earlier years, she was a wonderful seamstress. Mom considered one of her greatest achievements making her daughter, Helen’s, wedding dress where she hand-stitched every bead and sequin in intricate detail. She was a dedicated employee of Warwick Electronics for 24 years (from 1966 until her retirement in 1990). Here she made several lifelong friends. Left to carry on her Legacy and cherish precious memories are: Helen (Kenneth), Milwaukee, WI; Myra (Marcus), Austin, TX; Henry III, Ft. Worth, TX; Michael (Simira), Hutto, TX and Sandra, Memphis, TN. 10 Grandchildren, 19 Great Grandchildren, 1 Nephew (Vernal Taylor) and 1 niece (Dalemarie Taylor). Preceding her in death were: 1 grandson (De’Ron Michael Davis), 2 Nephews (Verdell Taylor and Willard Taylor). A host of nieces, nephews, cousins and countless friends will forever smile and enjoy the memories of one LUZENNE DAVIS-BRADLEY.

The family of Luzenne D, Bradley created this Life Tributes page to make it easy to share your memories.

Send flowers to the Bradley family.