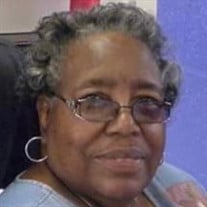 Lucy Lee Zachary was born on March 9, 1935 to Marion and Lily C. Chambers in Manor Texas. Lucy accepted Christ in life and was baptized. She was a member of St. Love All Baptist Church and later after a consolidation of St. Love All BC and Swenson... View Obituary & Service Information

The family of Lucy Zachary created this Life Tributes page to make it easy to share your memories.

Send flowers to the Zachary family.