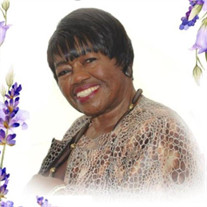 1-2 For everything there is a season, a time for every activity under heaven. A time to be born and a time to die. A time to plant and a time to harvest. On August 2, 1936, God blessed the union of Walter Cannon and Madie (Hogan), with their second born, Lucille, lovingly called “Mamma Lu” or "Sil.” Both hardworking and loving parents and two brothers (Thedio and Walter Jr.) preceded her in death. After a hard-fought battle with ALS, King Jesus called Lucille home on March 8, 2020. One of seven children, Lucille was born and raised in Starkville, Mississippi. When she was a child, her family relocated to Maywood, Illinois, where she attended Washington Elementary and Proviso High School. Lucille was as an extended parent within her family, which was always her top priority, and she proudly served as the matriarchal anchor after her mother passed. She worked throughout her teenage years to ensure that her sisters and brothers had opportunities to achieve their greatest potential. To Lucille, one’s potential could not be fully achieved without an education; this thirst for knowledge helped her to earn three associate degrees. She supported and encouraged (and at times insisted) that her younger siblings, as well as her only daughter, earn a college degree. Her efforts helped them to acquire multiple undergraduate and advanced degrees. Lucille was an independent, smart, strong, and creative woman. She relocated to Los Angeles, California, alone, in the early 60s during a time that such an action was atypical for a single woman. She found love and married Christopher Allen (deceased), and they were blessed with one daughter, Dr. W. Constinia Allen Charbonnette. Also, while in Los Angeles, she found her true vocation in law enforcement; this profession was a natural fit for Lucille given her high sense of integrity and commitment to serving others. Lucille retired as a U.S. Customs Agent, and she remained active in the Federal Employees Union until her health significantly declined. 3 A time to kill and a time to heal. A time to tear down and a time to build up. Lucille experienced hardships and setbacks throughout her life; however, she never allowed life’s uncertainties to prevent her from surviving and thriving. Her grit, resilience, determination, and most importantly, her faith in King Jesus sustained her through it all. As a baptized believer, joyfully served her community and her church, St. Andrews Baptist Church, where she was an usher for over 30 years. Part of her service commitment and passion was voter rights within the African American community, and she worked for three decades as a voter registration volunteer and as a community voter Precinct Captain. 4 A time to weep and a time to laugh. A time to mourn and time to dance. Lucille brightened up any room she entered. Her beautiful smile, warm hugs, and engaging personality made others gravitate to her. Her ability to make people laugh, especially with her creative puns, will be sorely missed. Lucille loved to dance, sing, and play dominoes and bid whist. In fact, her baby sister, Pat, who lovingly cared for her throughout her fight with ALS, would play dominoes almost every night until her passing. Lucille is survived by her daughter, Dr. W. Constinia Charbonnette (Eric); her sisters and brother: Dr. Queenella Miller (Erone), Irene Beck (Bobby, deceased), Patricia McNeil (George, deceased), and John Henry Cannon (Bobbie). She also leaves behind her beloved nieces: Regina Haynes, Sheila Sherrod, Karen Bana, Anita Carpenter, Sheree Cannon, Monya Cannon, and Melva Matthew; and her beloved nephews: Andre Miller, Tyrone Cannon, Walter Cannon III, Ray Beck, and Jonathan Cannon; and a host of extended family and friends, including her godsister, Dr. Valerie E. Epps (John). While we miss Lucille, we can only thank God for the legacy she leaves within all of us, and we take comfort in knowing that one of God's angels lived her earthly life among us. Through it all – the laughter and the tears – we've been blessed to behold a glimpse of God's glory.

1-2 For everything there is a season, a time for every activity under heaven. A time to be born and a time to die. A time to plant and a time to harvest. On August 2, 1936, God blessed the union of Walter Cannon and Madie (Hogan), with their... View Obituary & Service Information

The family of Lucille (LUCY) Cannon created this Life Tributes page to make it easy to share your memories.

1-2 For everything there is a season, a time for every activity...

Send flowers to the Cannon family.