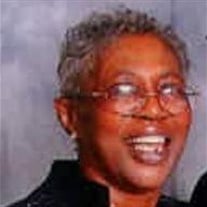 Linda Ann Caldwell Williams was the youngest child born to George W. Caldwell, Jr. and Fannie Mae Tyson Caldwell on September 14, 1944 in Pflugerville, Travis County, Texas. She attended the Pflugerville Colored School from the first through the eighth grade and then she attended and graduated from Hopewell High School in Round Rock, Texas. Linda professed a faith in Christ at St. Mary Missionary Baptist Church in 1957. As a child she participated in Sunday School as the secretary, the Youth Department, Youth Choir, Baptist Training Union (BTU) and Usher Ministry. Her adult service she served as an Usher and was a Deaconess. She served faithfully until her health failed and prevented her from participating. Linda met and married Norris Carr, Jr. and to this union three children were born: Sheila Yvette, Christopher Allen and Sarah Lynn. She worked in the healthcare field for many years and eventually retired from Brackenridge Hospital. Her love for helping others led her to do childcare for young parents needing assistance in that area where she came to be affectionately known as “MeMe.” Linda was an avid sports fan. She loved the Dallas Cowboys, Texas Longhorns and LA Lakers. She was also a lover of all forms of music, but especially, Frankie Beverly and Maze. In 1983 she met her soul mate, Dewey A. Williams. They married on August 27, 1990 and Linda was a devoted and faithful wife until her passing. She was preceded in death by her parents and eleven (10) siblings. Linda leaves to cherish her memories, her husband of twenty-nine years, Dewey Williams, Sr.; one sister, Dorothy Ates; two brothers: Thomas Caldwell (Vivian) and Charles Caldwell (Dorothy); her children: Sheila Yvette Carr Wilson (Arthur); Christopher Allen Carr and Sarah Lynn Carr (David); special great niece: Ashley Caldwell Russell (Michael); grandchildren: Ja’Lyn, David, Jr. and Priscilla; her stepchildren: Debia, Dendria, Dewey, Jr. (Demetrius) and Danielle; step grandchildren: Daria, Dajja, Dewey III, Demoria, Denisha, Darrius, Darell, Brianna, Camel, Ania, Domonique, Lyric, Kenzie, Kawhil and Samyria; and a host of nieces, nephews, other relatives and friends.

The family of LINDA ANN WILLIAMS created this Life Tributes page to make it easy to share your memories.

Send flowers to the WILLIAMS family.