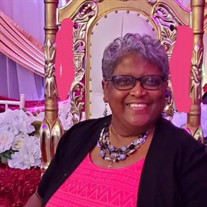 https://livestream.com/accounts/7325565/leolasmith For you created my inmost being; you knit me together in my mother's womb. I praise you because I am fearfully and wonderfully made; your works are wonderful, I know that full well”. Psalm 139: 13 - 14 Leola Denise Smith was born as the youngest of five children on January 25, 1956 in Memphis, Tennessee to Gladys Watts. She received her education in Memphis, Tennessee, and was a proud member of her high school Speech team. At an early age, Leola accepted Jesus Christ as her Lord and Savior, and was baptized in His name. After moving to Austin, Texas in 1979, she united with the New Light Ebenezer Baptist church. She moved her membership to Mt. Sinai Missionary Baptist Church in 1985 and faithfully served there for a little over 30 years. In 2016, she united with the One-Way Baptist Church, Round Rock, Texas. Leola used her strong communication, coordination, creative, organizational, and problem- solving skills in the workplace for many years. After retiring from the state of Texas in 2016 , she combined those skills with passion and love as the Director of Dancin Jazzi Dance studio/FLAVA Dance company, Austin, Texas; which was founded by her daughter Melanie and started in the garage of their home. You could almost always find her working at and fixing up the studio; preparing for recitals, productions, and competitions; and loving on the many families at Dancing Jazzi/FLAVA or cheering her grandsons on at their sporting events. Leola loved her grandchildren and took great joy in sharing her life with them. The people who knew her best must have listened to endless stories about those grandchildren or gave her tips and ideas on new shirts and things she could make for them on her Cri-Cut. Her granddaughter Olivia said it best as she remembered that “Gigi encouraged and fostered all of our creative sides.” Her grandsons Nate and Chris always returned home from Gigi’s house with a new shirt, craft, or something they made while with her. Too many times, she, and grandson Daquon had life discussions as they emptied or put up her 55-gallon fish tank. Leola was also known as “Queen Bee” and she enjoyed all things air conditioned, girly, and princess like. However, she most recently enjoyed the great outdoors where she played baseball and even fished with her grandsons who could get her to do anything! Leola would give her opinion without flinching or apologizing, but she never dismissed you for your choices and always welcomed you home when or if it did not work out. Most important, she made sure she told you she loved you and made sure you felt her love. God saw fit to give Leola eternal peace and rest at 5:25 P.M. on Tuesday, September 29, 2020 at Resolute Hospital, New Branufels, Texas. She was preceded in death by her mother, Gladys Watts, and sister, Rosemary Davis. She is survived by two brothers, Artie (Maria) Smith , Chicago, Illinois, and Raymond (Phyllis) Smith, Memphis, Tennessee; and one sister, Gloria (John) Logins, Austin, Texas; one son Marcus (Rhonda), Copperas Cove, Texas; two daughters, Rashunda (Chauncey) Reid, San Antonio, Texas and Melanie Smith, Austin, Texas; 4 granddaughters, Olivia Reid, and Brittani, Brianni, and Whittani Washington; 3 grandsons, Daquon Bratcher, and Nathan and Christian Reid; 1 great-granddaughter, Dionne Bratcher; a host of nieces, nephews, cousins, and friends; and her many Dancin’ Jazzi/FLAVA daughters, sons, and grandchildren who will all cherish her loving memory. Leola was indeed fearfully and wonderfully made! She was a devoted mother, sister, grandmother, aunt, and friend who never met a stranger. To know her was to love her. She coined the phrase, “Often Imitated but Never duplicated,” and that she was! She lived as an angel on earth and is now an angel in heaven as one of her many friends stated. Her children were blessed to be raised by her and now they have her in their hearts forever. May the giving, loving, and talented Leola Smith rest in peace until we meet her again.

https://livestream.com/accounts/7325565/leolasmith For you created my inmost being; you knit me together in my mother's womb. I praise you because I am fearfully and wonderfully made; your works are wonderful, I know that full well&#8221;.... View Obituary & Service Information

The family of LEOLA DENISE SMITH created this Life Tributes page to make it easy to share your memories.

Send flowers to the SMITH family.