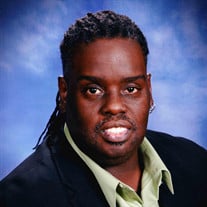 https://vimeo.com/638837575 https://www.flipsnack.com/alcbf/lelton-musgrove.html Lelton Decker Musgrove Jr. was born August 21, 1963 in San Antonio, TX; the only child of Lelton Decker Musgrove Sr. and Melba Enese Harris. He attended school in Baton Rouge, LA and San Antonio, TX. Although active in sports and other extracurricular activities, it was music that captured his heart and he began playing upright bass and bass guitar. To advance his talent as a musician, he enrolled at the Musicians Institute of Technology in Los Angeles, CA. In July, 1988, he became a father to Jaleesa D'Shay Haynes; an experience that changed his life. Although circumstances prevented him from spending as much time with her as he would have liked, Yoggie was a proud father. He often lovingly spoke of the joys of being Jaleesa's dad. Yoggie played the bass in many places across the world, none more important than the Mt. Zion Baptist Church where he acknowledged his belief in God and faith in Jesus Christ. He joined the church family and became a member of the music ministry. Yoggie was quietly faithful and dedicated to Mt. Zion even in sickness. He loved and was loved by his church family. While at Mt. Zion, Yoggie met Brenda Paulhill. They both served in the music ministry for several years before a random encounter while preparing for the choir's annual musical. Brenda asked Yoggie for his sandwich, which he willingly offered to her, and the ice was broken. Yoggie said he knew she was the one because it didn't bother him for her to eat from his plate. They discovered God had ordained their lives to share a profound love for one another. They were united in matrimony in February 2008 and Yoggie suddenly was no longer an only child as he was fully accepted into Brenda's family. Their all consuming love for each other was always on display. October 14, 2021 was God's appointed time for Yoggie's earthly journey to end. He went to his heavenly home from the loving arms of his wife at their home in Austin, TX. He is missed by many and leaves to mourn and cherish his life's memories his wife of almost 14 years, Brenda; his daughter, Jaleesa (Phoenix, AZ); one Aunt, Audrey H. Prestley (Baton Rouge, LA); cousins James Johnson (Austin, TX), Lewis Johnson, James Hudson, Levester Gentry, Martin Henry Woods (San Antonio, TX), Sterling Johnson (Oakland, CA), Jason Johnson (Los Angeles, CA), Eugene Prestly and Seletha P. Gosa (Baton Rouge, LA); one godson, Aiden Newhouse (Mansfield, TX). His family by marriage, the Paulhill family, also mourns his passing: Parents-in-law, 5 sisters-in-law, 3 brothers-in-law, 7 nieces and 5 nephews. Yoggie had many special friends he met through his music. They shared a love for music and each other. There are too many to name but among them are: Brannen Temple, Phillip Redmond, Jeff Plankenhorn, Turner Stephen Bruton (deceased), Tommy Newhouse, Terrell Shahid and Brian Mendes.

The family of Lelton Decker "Yoggie" Musgrove Jr. created this Life Tributes page to make it easy to share your memories.

Send flowers to the Musgrove family.