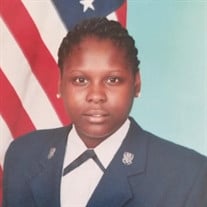 So will it be with the resurrection of the dead. The body that is sown is perishable, it is raised imperishable; it is sown in dishonor, it is raised in glory; it is sown in weakness, it is raised in power; and it is sown a natural body, it is raised a spiritual body. If there is a natural body, there is also a spiritual body. -1 Corinthians 15:42-44 LeKita Revette Hurd was born on August 22, 1989, in Texarkana, Texas to Leora Jackson and Bryce Matthew Hurd, Sr. LeKita was the youngest of five children. LeKita accepted Christ at an early age. She obtained her GED from Job Corp when she was just 17 years old and immediately enlisted in the Army afterwards. She served nearly four years in the Army, going on two tours to Afghanistan and Iraq. LeKita was known for being extremely loyal to friends and family. Her favorite words to her siblings were “I love you!” KeKe also used words like “Let me know whatever you need.” or “Sure thing, Sis.” She would go the extra mile just make sure everyone had what they needed and always was supportive in emergency situations. LeKita loved and cared for her two children Gavin and Kalila as a single mother. She also adored her nieces, Almoni and Genesis and her nephews Lars-Matthew and Zachariah. All of them thought she was the “coolest” aunt. Some of her favorite things to do were listen to music, bowl, and play pool. She was also a Dallas Cowboys fan. LeKita is survived by:  Gavin Elbersh – Son  Kalila Elbersh – Daughter  Leora Jackson – Mother  Bryce Matthew Hurd, Sr. – Father  Bryce Matthew Hurd, Jr. – Brother  Shamika Jackson, Hettie Thompson, and Rebecca More – Sisters  Almoni Toussaint, Genesis Thompson– Nieces  Zachariah Webb, Lars-Matthew Akpan – Nephews LeKita Revette Hurd was a mother, sister, daughter, niece, and friend. She will be deeply missed by her family.

The family of LeKita ReVette Hurd created this Life Tributes page to make it easy to share your memories.

So will it be with the resurrection of the dead. The body that...

Send flowers to the Hurd family.