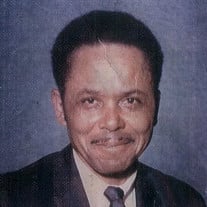 Lawrence Oscar McDonald was born to the union of Virgie and Oscar McDonald on September 29, 1924, in Cedar Creek, Texas. A principled and professional man, he came from an esteemed and lovingly close family that believed in hard work, education, and integrity. Lawrence accepted Jesus Christ and was baptized at an early age. He attended primary school at Hopewell School, and graduated valedictorian from Emile High School at the age of sixteen. His paternal grandmother, Sophie McDonald, lovingly called him ‘Sugar Lump’ because of his complexion and sweet, charming personality. That personality served him well, opening many professional and social doors throughout his life. In 1946 he migrated to California and landed his first major job with East Bay Regional Parks. He began in a entry level position as a groundskeeper quickly working his way up to supervisor. He was highly respected and admired among his professional peers. In addition to his strong work ethic, he was passionate about a particular recreational activity. And for those who knew him well, what was the number one thing he loved to do? Dominoes! He knew how to give some unrequested lessons and unsuspected whippings with the bones. His love of dominoes came from his elder Sister Ethel Jackson. They often engaged in marathon games from sunset to sunrise. His comical statement "I would jump off a speeding freight train to play dominoes" attested to his love for the game. Unbeknownst to most, he had a great singing voice and fulfilled his longtime dream of recording a rendition of Billie Eckstine’s A Prisoner of Love in February of 2017. In addition Lawrence shared a wonderful life with his wife Annie L. McDonald. They not only had a great marriage, but were inseparable and had a real friendship. Lawrence loved his children and desired and cherished time with each one of them. We will miss a great father and man. But earth’s loss is heaven’s gain; those who love and obey God will see him again. Lawrence departed this life on January 29, 2019. He was preceded in transition by his parents Oscar and Virgie McDonald; wife, Annie L. McDonald; brothers Leroy McDonald, Richard McDonald, Thaddeus McDonald, Curtis McDonald and Lester Alridge; Sisters Ethel Jackson, Maude Collins, Cora Willie Aldridge and daughter Brenda Jean Williams. He leaves to cherish his memory daughters Belinda Davis (Samuel Davis), Vanessa McDonald, Linda McDonald, and Felicia McDonald; six grandchildren, ten great-grandchildren (one on the way), and a host of nieces, cousins, and nephews.

Lawrence Oscar McDonald was born to the union of Virgie and Oscar McDonald on September 29, 1924, in Cedar Creek, Texas. A principled and professional man, he came from an esteemed and lovingly close family that believed in hard work, education,... View Obituary & Service Information

The family of Lawrence Oscar McDonald created this Life Tributes page to make it easy to share your memories.

Lawrence Oscar McDonald was born to the union of Virgie and Oscar...

Send flowers to the McDonald family.