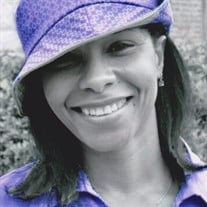 LaTecia “Shalon” Prince was born June 4, 1966, in Los Angeles, California to parents Walter Prince, Jr. and Marva K. Lewis. Shalon grew up in San Francisco, California. Her family later moved to Austin, Texas, where she graduated from LBJ High School in 1984. She was a member of Tri Unity Baptist Church in San Francisco, where she accepted Christ and was baptized. She later joined Greater Mt. Zion Baptist Church in Austin. Shalon worked 31 years for the Internal Revenue Service (IRS) as a tax examiner and manager. Throughout her career she received many accolades for her hard work. Her most recent award was a 30th anniversary plaque recognizing her dedicated service. Shalon also worked part-time for 16 years at the Travis County Sherriff’s Office as a corrections specialist. Shalon was deeply grateful to both IRS and Travis County colleagues for providing tremendous support during her illness. Shalon was diagnosed with stomach cancer in April 2017. During her illness she experienced spiritual growth and a renewed faith In Jesus Christ. She looked forward to the friends, colleagues, and ministers who came to cover her in prayer. After a courageous battle, Shalon transitioned to eternal rest on October 10, 2017. She was preceded in death by her father, Walter Prince, Jr.; and her maternal grandmother, Sarah Toles Cross. Shalon leaves to cherish her memory: her mother, Marva K. Lewis; brothers, Tony Jones and Dante Prince; sister Kecia Prince; nieces, Jasmine Prince and Sharrell Prince; nephews, Jaydon Prince and Jose Jones. She also leave a host of aunts, uncles, cousins, other relatives and numerous friends. Friends remember Shalon as strong, independent, honest, ambitious, daring, inclusive, intelligent, beautiful, meticulous, and reliable. She graciously touched many lives through her wonderful acts of kindness and giving. Her indelible legacy as a loyal friend was demonstrated through the many friends and colleagues who visited, donated, and assisted during her final months. Within her wide circle of treasured friends, Shalon’s best friends were Maureen, Trina, Shawna and Rhonda. Also among her dearest friends were Ms. Catherine, Ms. Sandra, and Ms. Algarene. Shalon a lover of purple, enjoyed working, cooking, spending time with friends, and visiting the Bay Area. She remained resilient until her final breath. May her fortitude, the best of who she was, and her unforgettable smile live on forever in all who knew her

The family of Latecia Shalon Prince created this Life Tributes page to make it easy to share your memories.

Send flowers to the Prince family.