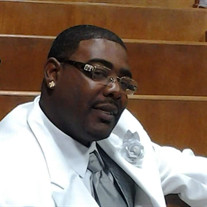 On November 1, 1975, God graced Brenda Joyce Prejean and Larry Leger, Sr., with a bouncing baby boy in Austin, Texas. Larry James Leger, Jr. aka Junia. Larry departed his earthly life on July 17, 2019. Junia as he was affectionately called graduated from Lanier High in Austin, Texas, where he went on to work for different companies where he was able to do the one thing he loved to do which was to drive. He worked as a driver for Limon, LKQ, Dominos and Arnold Oil. He attended Austin Revival Center Church where he married His longtime sweetheart. On April 20, 2013, he and Loleshia Cureton married and to this union two children were born Kemani and Kesho and an added blessing of an older daughter Kiera Jones who was added to his joy the day he said I do. Junia was a family man. Always wanted to make sure everyone was good and taken care of. He was the man who never said no. If he had it and you needed it, it was yours. Junia always kept a smile on his face with “eye low”, he loved to listen to some good screw but, his favorite was zro,”……” with his special skills as an herbologist he always enjoyed it with a good good cigar. He was laid back, funny, man of few words with a great heart, a person of his word, great husband, father, son, brother, uncle, cousin, nephew, friend, co-worker, great encourager and an even better road dog and homie to roll with. I know without a doubt Junia would want me to not say goodbye… He would say…Already! See Ye Later! Larry leaves to cherish his memory wife, Loleshia Leger; children, Kemani, Keshon, Kiera; Mom, Brenda; stepfather, Gilbert, Sr.; mother-in-law, Daravenel Jackie; father-in-law, Keith, Sr.; grandmothers, Ezella and Lois; sisters, Lydia, Amanda, Brandy, Maria, Shannon, Khadijah, Lynn, Dale; brothers, David, Montrell, Marquis, Matthew, Keith, Jr., Christopher, Mike, Gilbert, Jr., Gary; and a host of aunts, uncles, nieces, nephews, cousins. Larry is preceded in death by his father, Larry, Sr.; grandfather, Essie; Aristel, Sr., Lydia, Mag, Danny, Aristel, Joseph, Cynthia, Shellie, Laura, and Mitchell.

The family of LARRY JAMES LEGER JR created this Life Tributes page to make it easy to share your memories.

Send flowers to the LEGER family.