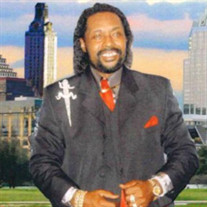 https://livestream.com/accounts/7325565/larryhargrove https://www.flipsnack.com/alcbf/hargrove.html Larry Shannon Darnell Hargrove, a native of Manor, Texas, was born on December 5, 1950 to Louise and Nelson Hargrove, Sr. who both preceded him in death. Larry attended public schools within the Manor Public School System. He accepted Christ at an early age and had a special love for God and people with a great compassion to touch lives. He developed his passion for singing in the church and by his father who was an exceptional vocalist and guitar player. Larry was a great and talented singer, actor, songwriter with roles in the films, “Led Batter” and “Label”. In the 1970’s, he wrote the song, “How can you win” which was featured on the Billboard Charts nationwide. His Las Vegas Broadway styled big band and light show with his rhinestone studded suits was his signature flair that dazzled the crowds. He was manager of “The Fabulous Mark III Show Band”, “The Techniques”, and “The Funky Music Machine Band”. Opening shows and working with acts such as Tyrone Davis, Bobby Womack, Betty Wright, The Chi-Lites, Barbara Acklin, Bo-Bo Mr. Soul, James Brown, Keith Sweat, Lenny Williams, The Brothers Johnson, Con Funk Shun, Midnight Starr, Staple Singers, The Emotions, Archie Bell & The Drells, and many more. He has written songs for major acts such as Joe Lagon of The Mighty Clouds of Joy and Bo Williams. As a determined entrepreneur, he became the first black man to own a limousine company in Austin, Texas and was part owner of the Soul Factory, which was the place to go in the 70’s. With his positive attitude and ability to identify with others, he also became the owner of the Garden Club, a great performance arena for bands. He also owned and operated a general contracting company and had client accounts all over the city because of his unparalleled ability to establish and maintain professional relationships. Larry was active in almost every aspect of the music industry with experience in artist development, concert promotion, and club management. In Los Angeles, California, he recorded his rendition of, “The Wind Beneath My Wings” from one of his greatest albums, “Own my Own-Larry”. Some of his major recording albums included “Deep Out of the Heart of Texas (Austin, Texas is My Home)”, “Soundtracks of my Life”, “The Gospel Project” and the nationally acclaimed, “Leave Bill Clinton Alone”. In addition to being played all over the country, Leave Bill Clinton Alone was also inducted into the Smithsonian Museum of American History. Former President Bill Clinton even personally told Larry that he loved the song and played it throughout the White House and on Air Force One. As a singer/songwriter, his music was played all around the world and featured on radio shows such as Howard Stern and Rush Limbaugh-just to name a few. It was also featured on all of the National and International news networks, CBS, NBC, ABC, FOX, CNN, and many more. He was honored for his community contributions by the former Austin Mayor, Bruce Todd, and the City of Austin. In 1999, Mayor Kirk Watson (Austin) proclaimed January 7, 1999 as Larry Shannon Hargrove Day in Austin, Texas. In addition, the National Forum for Black Public Administrators also honored him for his innovative work in the school district. One reporter even described him as, “A Cross Between A Country Preacher and a City Lawyer”. His smooth and silky vocal style and colorful personality earned him the trade name, “The Texas Songbird” and “The Crown Prince of Southern Soul”. Of all of his marvelous accomplishments, Larry took the most pride in being a devoted husband to his wife Margie, a father to his children, and grandfather to his grandchildren. He took the time to teach them the value of a strong work ethic and earning an honest living, while also encouraging them to be active contributing members of society. He left an indelible mark on the Austin Community and the state of Texas. He will be missed by many, but his legacy will live on through generations. He was preceded in death by his parents, Louise (Zachary) and Nelson Hargrove, Sr.; Sister Velma Hunter; Brother Arthur Hargrove, and Daughter Karen Hargrove. Larry shall forever be loved and missed dearly by his loving wife, Marjorie Hargrove, of 42 years of Austin, Texas; Children: Angela Jackson of Houston, Texas; James Webb of Round Rock, Texas; Shon Hargrove of College Station, Texas; Dr. Courtney Roberson (Trent) of Columbus, Georgia; Corey Hargrove of Austin, Texas; Terrence “Max” Hargrove (Samara) of Austin, Texas; Juston “O’Bryan” Hargrove of Austin, Texas; Sisters and Brothers: Joe Hargrove (Carrie-deceased), Alonzo Hargrove (Esther Jo), Lillie Richardson (Thomas), Nelson Hargrove (Shirley), Jerry Hargrove (Jean), LeRoy Hargrove, Floyd Hargrove, Roy Hargrove, and Anita Showels (Ray); 14 Grandchildren; 9 Great Grandchildren along with a host of beloved nieces and nephews.

The family of Larry Shannon Hargrove created this Life Tributes page to make it easy to share your memories.

Send flowers to the Hargrove family.