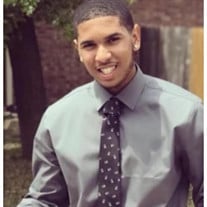 https://livestream.com/accounts/7325565/jordanwalton https://www.flipsnack.com/alcbf/walton.html Honoring the life of "Jay Dinero" officially born Jordan Montreal Walton on the sunrise of June 10th, 1999. Jordan was born to the parents of Anissa Stovall and Terrell Walton at St. David's Hospital located in Austin Texas. Jordan joined the ministry of New Hope Missionary Baptist Church officially becoming an active member in April of 2004 and dedicating his life to Christ on January 13th, 2008, under the guidance of Pastor Roy F. Jones II. Jordan later expanded his services to the lord by uniting alongside the New Hope Usher board in December of 2006. While also maintaining an active participation in the "Young Men's Ministry". Jordan was inspired to rededicate his precious life on June 9th, 2019, as a young adult. Jordan attended Manor High School where he graduated and received his High School Diploma. He participated in extracurricular activities such as football and FHA. After graduation, Jordan maintained employment at the local HEB and later enrolled in Austin Community College to pursue an associate's degree in Business. In hopes of following the steps of his late grandfather Timothy Stovall, Jordan aspired to become an entrepreneur, "his own boss". He went on to pursue his dreams of becoming an independent auto dealer and part-time Facebook Comedian. Jordan was driven for financial success. His fondness for cars supplied him with a purpose in life; not only were vehicles sold, but some were donated to friends and family members as well. A true giver, a true friend, and forever a helping hand always. Jordan lived his absolute best life according to his terms, creating a beautiful legacy. He without a doubt loved, honored, and cherished his family, church family, friends and especially his two beautiful nieces. Jordan's joy in this lifetime was to create an environment where everyone smiled, laughed, and was taken care of. He enjoyed spending his quality time with his nieces, taking them to "fun" places, shopping, and making TikToks. He enjoyed his dogs, "Mr Woofers and Bella," driving his "Dodge Hellcat," and playing endless games of Xbox or basketball with his little brother Kamerion. Jordan enjoyed eating Pluckers, Longhorn steakhouse, Rolling Rooster, and his absolute favorite "Juan in a Million" every chance he got. He loved his music, dancing, and wearing his cowboy hat in every Texas Season. Jordan was a beautiful soul with a beautiful smile, laugh, spirit, heart, and mind. Jordan entered into eternal rest on February 10, 2021. At the young age of 21, Jordan leaves behind a legacy that touched the lives of so many people. He is preceded in death by his grandfather Timothy Stovall, great-grandmother Dorothy Walton, great grandfather John Henry Stovall, and cousin Timantha Stovall. He leaves to cherish his memory, his parents Anissa Stovall & Terrell Walton of Austin. Two sisters Rickeal Crittendon and Layla Walton of Austin, Texas. Four brothers Kelsey Walton, Noah Walton, Kamerion McBride, and Jarren Rogers all of Austin, Texas. Two nieces Kaliyah Sterling & Jenesis Fisher. Two grandmothers Diana Seyphus of Bryan, Texas, and Sandra Stovall of Austin, Texas. Bonus grandmother Dorothy McBride of Austin, Texas. Four uncles, Keith Walton of Bryan, Texas, Tyrone Stovall, Timothy Stovall, and John Stovall all of Gonzales, Texas. One aunt Tcherlendra Webb of Bryan, Texas. Three special aunts Metra Foster, Natalie Cole, and Shimona Kirkland and a host of other cousins and relatives.

https://livestream.com/accounts/7325565/jordanwalton https://www.flipsnack.com/alcbf/walton.html Honoring the life of "Jay Dinero" officially born Jordan Montreal Walton on the sunrise of June 10th, 1999. Jordan was born to the parents of... View Obituary & Service Information

The family of Jordan Walton created this Life Tributes page to make it easy to share your memories.

Send flowers to the Walton family.