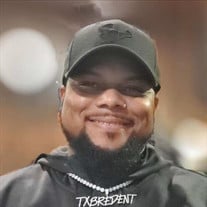 https://livestream.com/accounts/7325565/johnnyclarkjr Johnny L. Clark Jr. was born on July 14, 1972 in Austin, Texas to the late Roxann Gibson Clark and Johnny L. Clark Sr. He received his education in the Round Rock and Austin Independent School Districts, and graduated from Reagan High School. He then went to the U.S. Army, and after serving, he worked several jobs between Austin and Memphis, TN. He later relocated to Houston, Tx and found his career job with Colonial Pipeline as an Operator; and met his wife, Tamiko Clark, whom he was married to for 8 years. He was a devoted husband and father and he loved to announce his wife and lovingly called her Ocean. Johnny accepted Christ as his Lord and Savior at an early age and was baptized by the late Reverend James E. Obey. He was active in the youth department and youth choir at David Chapel Missionary Baptist Church. Johnny ran track and held a state record until it was finally broken in 2008. He liked sports, enjoyed fishing, he loved to cook, and entertain. Johnny was also the life of the party making sure everyone was having a good time. He was always well dressed from head to toe and blinged out. Motorcycle riding was his passion, and he later joined Cycles In Action also known as C.I.A. To some he was known as Hollywood, and he was better known as Mac Daddy aka King Mac by his C.I.A. family. Johnny was a true family man and made sure his family was always provided for instilling family comes first and to strive for the best. They would have dance contest, singing, racing with the neighborhood kids, and he taught them how to invest, save, and put money up for the future. Johnny was very in tune with his wife, and they never hesitated to open their door and accept all that came to visit. As a family they loved to travel to Jamaica Beach, Alaska, Corpus Christi, Virginia, and loved to spend time together. Johnny was always laughing and smiling with his grandkids, and loved writing and making music. He was able to make a song with his dear friend, Street Minister Whitehead, before his passing. Johnny was preceded in death by his mother, Ms. Roxann Gibson. He leaves to cherish his devoted and loving wife Tamiko Clark, his children, Stephen White (Walinta) of Virginia Beach, Va., Cameroun White (Jasmine) of Colorado Springs, Co., Jaqueline Marshall, Na'Jara Ellis, Racia Ellis, Janasha Ellis, all of Katy, Tx., He’s also survived by his father Johnny L. Clark Sr. Of Houston, Tx, his grandfather John Parker Clark (Mildred), his grandmother, Beatrice Gibson, his aunt/second mother Tenya Williams, all of Austin, Tx, his grandchildren Naveah White, Naomi White, both of Virginia Beach, Va., Olivia Gaston of Katy, Tx., two sisters, LaTara Clark and Roxann Whitley (Donta), both of Austin, Tx. One brother, Johnny Lamont Clark, of Lake Charles, La., two special friends (brothers) James Whitehead, and Alfredo Hector, and a host of aunts, nieces, nephews, cousins and many many friends This Great Celebration will be a Personal Signature Service under the Professional Guidance of Dr. Barry J.W. “The Shepherd” Franklin,CFSP at A Life Celebration By Franklin who will fulfill his final earthly celebration with great excellence.

https://livestream.com/accounts/7325565/johnnyclarkjr Johnny L. Clark Jr. was born on July 14, 1972 in Austin, Texas to the late Roxann Gibson Clark and Johnny L. Clark Sr. He received his education in the Round Rock and Austin Independent... View Obituary & Service Information

The family of Johnny L. Clark Jr. created this Life Tributes page to make it easy to share your memories.

Send flowers to the Clark family.