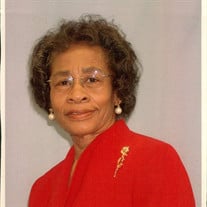 The life book of Sister Johnnie Mae Littlefield, affectionately known as “Buggie” opened on March 14, 1930, to Elmo and Essie Sorrells in Manchaca, Texas. Sister Littlefield was raised by her mother, Essie Allen, Carrie Dotson (Maternal Grandmother) and other close family members. She attended Blackshear Elementary, Kealing Junior High and was a graduate of the original L. C. Anderson High school. On June 14, 1947, she married the love of her life, the late Deacon A. C. Littlefield. To this marriage, one son was born who expired in infancy. Sister Littlefield loved to travel extensively over the United States with her husband, a lead singer with the Bells of Joy and well-renowned country singer Willie Nelson. After he passed on January 1999 she continued to travel with her cousin Leslie Jones and Dorothy Burton. Her hobbies included sewing and growing plants and flowers. She loved the outdoors and was often seen by the Palmer family, her lifelong neighbors, raking leaves in her yard until her health failed. As a young lady Sister Littlefield joined and was baptized at the New Lincoln Baptist Church (formerly Lincoln Missionary Baptist Church), Austin, Texas under Pastor I. N. White. Later she and her husband joined the Mount Olive Baptist Church, Austin, Texas under the pastorate of Reverend Herbert A. Sneed and Reverend Raphael C. Smith (both deceased). Under the leadership of Pastor, Reverend Richard E. Carter, she continued to work faithfully with the Deaconess, Mission 1, and Sunday School. She was a trusted and meticulous bookkeeper and served as Sunday School Class Treasurer and Mission 1 Treasurer for over 30 years. She was a committed worker for the Lord in other leadership roles including Vice President of the Junior Circle, Assistant Superintendent of the Junior Sunday School, and President of the Deaconess. Sister Littlefield loved working in other church ministries including, the Baptist Training Union and the Chapel Choir. One church member stated, “Sister Littlefield was always very generous in donating monies and her time for church events and programs.” Sister Littlefield was not only a good at finances – but she was an organizer. She was one of the charter members of the Sorrells family reunion. For over 38 years she organized family gatherings all over the United States. These reunions include business meetings where scholarships are awarded to family members. This reunion continues today attended by more than 100 family members and guests. Everyone loved Sister Littlefield. She loved children and along with her husband, helped raise several cousins and other family members. Her devoted and longtime friend, Sister Dorothy Burton visited her every week and brought her to church as long as she was able. She also loved going on trips and out to eat with “The Golden Girls”. She and Sister Mae Lois Wilson were the last two members of that beautiful group of ladies and would take long walks on Saturday mornings while her health allowed. Even when she was not at 100%, she would often walk to the Wilson’s house for a visit. She was preceded in death by her parents, Elmo and Essie Sorrells, Step-Father Curtis Allen, Husband A. C. Littlefield, one brother, Robert Sorrells and special cousins Eunice Arnold and Willie Sorrells. To celebrate her life’s legacy she leaves: Aunt, Robbie Overton (Austin); Nieces and nephews: Robbie Sorrells-Thomas, Killeen, Texas, Janet Sorrells, Missouri City, Texas, Roy Sorrells (Sandra) Austin, Texas, Linda Sorrells, Dallas, Texas, Carol Vaughn (Ronald) , Sugar Land, Texas; two greatnephews, two great-nieces; and a host of cousins, nieces, nephews, extended family and friends. Her family along with God-children Charlene Deeton (Frederick), LaMeca Davis, Brion Williams, LeJordan Davis, Princess Davis, special cousins Deborah Harper and Gregory Davis; Special Friends Dorothy Burton and Mrs. Mae Lois Wilson will always remember and cherish their relationship and memories.

The family of Johnnie Mae Littlefield created this Life Tributes page to make it easy to share your memories.

Send flowers to the Littlefield family.