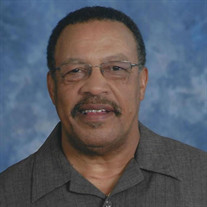 John Douglas Collins, Jr. (affectionately known as Jim or John D to family and friends) was born August 30, 1946 in Elgin, Texas. He was the second child born to John Douglas Collins, Sr. and Katie Mae Jones Collins. He departed this life on Wednesday, April 22, 2020. He is preceded in death by his loving wife and high school sweetheart, Esther Yvonne Owens Collins; parents, John and Katie Collins; grandmother, Bertha Mae Jones (Big Mama); and sisters, Louise Cook, Delores Thomas, Elois Moorer. John attended and graduated from Booker T. Washington High School, Elgin, Texas. He received his Associate Degree in Business at ACC, Austin, Texas. He was a faithful and dedicated employee at the Texas Department of Parks and Wildlife and Public Safety for ten plus years and IBM for eighteen years. On May 2, 1966, he was drafted into the U.S. Army and served as a Communications Specialist in the Vietnam War. He was honorably discharged on May 3, 1968. John accepted Christ as his Lord and Savior at an early age, was baptized, and became a member of Winn’s Memorial Baptist Church, Elgin, Texas. In the late 70’s, he joined St. James Missionary Baptist Church. He served on the Deacon Board and was a member of the Usher Board, Men’s Ministry, and E.M. Franklin Male Chorus. He remained a loyal and active member for forty plus years until his death. John loved fishing, hunting and all sports. In high school, he played tennis, basketball, and ran track. His passion was football #22, where he excelled as a running back and defensive cornerback with the notorious Elgin Eagles. He joined a bowling league and even tried his hand at golfing. He loved attending his granddaughter’s track and field and volleyball events. His favorite professional teams were the Washington Redskins and the Los Angeles Lakers. For many years, he and his cousin/best friend, Bobby Ray Jones, attended the UIL basketball tournaments. In October of each year, they and their brother-in-law, Odis Owens, Jr., would travel to Ennis, Texas where they would attend the NHRA Fall National car races. John was confident, loyal, caring and dependable. He was a loving son, brother, father, uncle, friend and mentor. He was loved by everyone who was fortunate enough to know him. John leaves to cherish his memory; son, Kevin Collins (Crystal) of Cedar Hill, TX; daughter, Tonya Allen (MarKeith) of Pflugerville, TX; sisters, Marva K. Wynn (James) of Duncanville, TX.; Daffney A. Henry of Manor, TX; brothers, Joseph “Dandy” Collins of Antelope, CA; and Alvin Collins of Elgin, TX; brother-in-law John Moorer of Austin, TX; grandchildren, Alexea Collins, Kyra Collins, Chaise Collins, Kamryn Allen, Renee Butler (Joey), Deverone Harrison, and Jonathan Williams; great grandchildren, Shawna and Trey Butler; and a host of nieces, nephews, relatives and friends.

The family of John Douglas (Jim) Collins Jr. created this Life Tributes page to make it easy to share your memories.