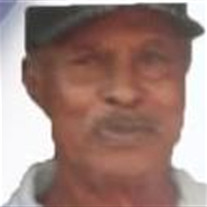 Jodie Collins was born July 21, 1939 in Eldorado, Texas, the second of three children to Warner Collins and Myrtie McGarty-Moten. He was affectionately called “Joe Boy” and he loved and cherished his family and friends. Jodie attended elementary school in Seguin ISD then completed his remaining school years in Austin ISD. Jodie graduated from Anderson High aka “Old Anderson” Class of 1956. In 1962 Jodie enlisted in the U.S. Military where he served 6 years for his country and in 1966 was honorably discharged. Jodie worked for Southern Union Gas Company for 6 years then Texas Department of Transportation (TxDot) for 30 years where he retired as the Facilities Manager. All who knew and loved Jodie knew his passion for sports of all kinds, but his heart was in softball with his favorite teams “the Warriors and the Lady Warriors,” whether it be playing or coaching. He loved spending time with family and friends playing cards, dominoes and most of all fishing. Jodie had no problem loading up his car and heading to the water to do some fishing. Preceding Jodie in death is his father Warner Collins, his mother Myrtie McGarty-Moten and his brother John Oliver Collins. Jodie leaves to cherish his memory his sisters Bettye Marshall of Smithville, TX, Ruby Collins of Haskell, TX, Darlene Collins of Haskell, TX, Linda Walker (Tony) of Dallas, TX and Brother Warner Collins Jr of Dallas, TX. His children: Dwain Reed, Jodie Collins Jr. (Mary) of Sacramento, CA, Carol Collins-Jarmon of Las Vegas, NV, Agnes “Niecy” Harris of Sacramento, CA, Terilyn Clark (Reggie) of Austin, TX, Rhonda Harris (Wilton) of Austin, TX, Tamara Collins-McFarland (Clinton) of Douglasville, GA, Jermain Collins of Temple, TX and Quentin Murray of Austin, TX. 18 grandchildren, 10 great grandchildren, a special nephew Craig Wiley (Angela) of LaGrange, TX, his special friend Pauline “PD” Davis of Manor, TX and a host of family and friends

Jodie Collins was born July 21, 1939 in Eldorado, Texas, the second of three children to Warner Collins and Myrtie McGarty-Moten. He was affectionately called &#8220;Joe Boy&#8221; and he loved and cherished his family and friends. Jodie attended... View Obituary & Service Information

The family of Jodie Collins Sr. created this Life Tributes page to make it easy to share your memories.