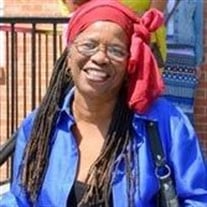 Jo Ann, the 11th child of 13, was born to the parentage of the late Bertha Kelly Davis and late Sidney “Buddy” Davis Sr. on May 2, 1947 in New Ibeira, Louisiana. She attended Henderson High School, class of 1966, followed by Bishop College in Dallas, TX and Southern University in Baton Rouge, LA where she studied English and Liberal Arts. Jo Ann and Benny George married in 1968. This union produced her only child Kedric George. She later married Larry Austin in 1979 and embraced a blended family with step-children Tut (real name), Larry, Jr and Marcus. She subsequently met Alonzo O. Jones, with whom she shared many fond years. Jo Ann relocated to New Orleans where she began her life-long career in the medical field as a insurance claims professor. Her love of people, desire to help, and attention to detail make her successful in her roles at Blue Cross/Blue Shields, Tulane Medical Center and Seton Medical Center in Austin, TX where she retired in 2011. Jo Ann accepted Christ at an early age and was baptized at Star Pilgrim Baptist Church, under the reverend Cyrus L. Jackson. She moved to Austin, TX in 1996 and established membership at Greater Calvary Bible Church, pastored by Archbishop Dr. Sterling Lands, II, where she was an active member, serving as a leader of the Bible Study, the Singles Ministry, and a member of the African Praise Dance Team. Jo Ann was passionate about life. She was a believer in the power and importance of education, of speaking the “Queen’s English” and of critical thinking, as her son and many of her nieces and nephews could attest. Jo Ann lived to inspire others and was committed to pushing and even pulling those she loved to fulfil their potential. She was a lover of words and enjoyed a good debate regardless of the topic or opponent. Jo Ann was a natural story-teller whose zeal kept her at the center of attention. At the age of 68 she began studying Tai Chi at Fire Dragon Dojo and was on her way to receiving her Brown Belt. She enjoyed being in the company of family, both by blood and by choice, and was known affectionately as “Aunt Jody” to many. Her indelible legacy will long be cherished by her only son Kedric George (Tamara); her siblings Easter Mae Watson (Harold, deceased), Sidney Davis Jr, Martha Ann “Marty” Doucette, and Minister Francis L. Davis (Angelee); nieces, Denise, Sandra, Sylvia, Ingrid, Sherri, Faye, Leslie, Kristie, Tammy and Jocelyn; nephews, Anthony, Quintin, Benny, Geroy, Harold Jr., Derek, Leroy Jr, Jamal, Jamarcus, Lawrence Jr; and a host of great nieces and nephews, and extended family and friends.

The family of JoAnn Davis created this Life Tributes page to make it easy to share your memories.

Send flowers to the Davis family.