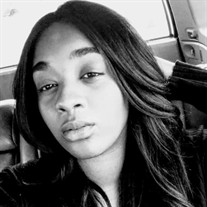 Jamilah Thomaseean Mise was born on June 12, 1992 to the union of Alisa Mosley and Jimmy Mize in Tucson, Arizona. Jamilah Mize was the middle child of seven siblings. Jamilah, spent half of her childhood in Tucson, Arizona and the remaining of her life in Austin, Texas. Jamilah had three beautiful children who she loved deeply. Jamilah Mize was saved at Trinity Missionary Baptist Church under the leadership of Pastor McDowell in Tucson, where she was first introduced to God. Years after moving to Austin, Texas, Jamilah Mize was baptized at Sold Out for Christ Ministries under the leadership of Pastor Archie Kelly. Jamilah Mize later got filled with the Holy Spirit at Faith Culture Church under the leadership of Pastor Gerald. Jamilah Mize graduated high school and attended community college with aspirations to complete her education. She desired the spiritual things of God more than the feeble things of this world. Jamilah was not into the lights and glamour that peaked the interest of most beautiful young women like herself. She enjoyed the simple things in life like movies, documentaries, and spending time with her children. Jamilah had a contagious laugh that one could not forget. She had a beauty that one could not ignore and a love that could never be replaced. Jamilah, desired to one day become a movie producer, bringing the dreams that she had spirituality into reality. Jamilah was loving, caring, and enjoyed spending time with her family. She was ”silly” at times and loved to laugh and joke around. Jamilah would express how she desired to be with her Father God in Heaven. On January 5, 2020 Jamilah Mize crossed over into eternity. She leaves to cherish her memory, her parents, Alisa Mosley and Jimmy Mize; her children; Nahlah Pierce, Marcel Mize, and Saire Pierce; her siblings; Chantanee Moore, Chanelle Cotton, Jalisa Mize, Elton Harris, Twin Mize, Nicole Brittany, Jamesha Mize, Edward Wilson, Cambernae Mosley, Destiny Bobo, Ajhinae Mosley, and Ambe Mosley; and a host of nieces, nephews, and family members who will miss her dearly.

Jamilah Thomaseean Mise was born on June 12, 1992 to the union of Alisa Mosley and Jimmy Mize in Tucson, Arizona. Jamilah Mize was the middle child of seven siblings. Jamilah, spent half of her childhood in Tucson, Arizona and the remaining... View Obituary & Service Information

The family of Jamilah Thomseen Mize created this Life Tributes page to make it easy to share your memories.

Send flowers to the Mize family.