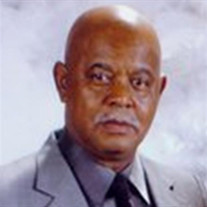 James Edward Bernard King was born on July 2, 1941 in St. Louis, Missouri to the late Jeff and Annabelle Moore King. James received his education at St. Matthews Catholic School, Simmons Elementary and then graduated from Sumner High School in Missouri. James served his country and was a Veteran in the United States Army where he received an honorable discharge then settled in Austin, Texas. James was blessed with many talents after his discharge and became a professional Interstate Truck Driver, where he enjoyed driving and traveling to various states. He retired in 2010 from Ameritex where he worked as a security guard. After retiring he began mentoring young men that he encountered as well as avid leader in his community where he was directly involved with his neighbors and loved by many who named him “Mayor” of the community he resided in. He enjoyed volunteering his time providing transportation for his neighbors that needed rides. In his spare time, James showed an interest in building computers and giving them to those that needed them. James loved and valued spending time with his family and grandchildren who he had been taking to school since kindergarten. James acknowledged his faith and accepted Jesus Christ as his personal Savior in June of 2000 and united with Greater Mount Zion Baptist Church under the pastorate of Reverend Gaylon Clark, where he was an active member. He devoted his time and energy serving as an Usher, Greeter, member of the food pantry, Brotherhood and Marriage Ministry. He was also a member of the Mount Carmel Grand Lodge where he served as the Worshipful Master of King Solomon Lodge #25. James quietly departed this life on Sunday, July 8, 2018. James was preceded in death by his parents, three sisters and two brothers. He leaved to cherish his memory his loving and devoted wife Betty Jo Hill King of 54 years, his children: Debra Ann Thomas, Rhonda Alexander (Ellis), Kevin Jackson, Janan “Jay” King (Terry), Randall “Randy” King, Tiffany Bradley (James), Christopher Riley, and Tracy Riley, and two sisters: Anice Mahone and Janie Raymond; two brothers; Jeff King Jr. and Ronald King. Seven grandchildren and three great grandchildren as well as a host of God-children, nieces, nephews, cousins and friends.

The family of James Edward King created this Life Tributes page to make it easy to share your memories.

Send flowers to the King family.