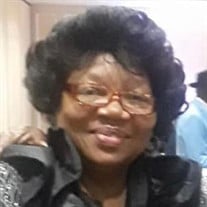 Jacquelyn Allen Brown was the first born to the late Herbert Johnson and Ora Lee Whalon on November 15, 1950 in Jacksonville, Texas. In 1974, she accepted JESUS CHRIST as her LORD and Savior and was baptized by Reverend Dr. G.V. Clark at Mount Zion Baptist Church. She attended public schools in Austin, Texas. She also attended Austin Community College where she received an Associate Degree in Criminal Justice and later earned a Bachelor degree in Child Development from Southwest Texas State University. Jacquelyn was married to Johnny Brown Sr. for 17 years and to this union one son, Terrance Allen, was born. Jacquelyn was the mother of six children; Phyllis Johnson-Watson, Quincy Johnson, Darrick Johnson, Tysha Johnson, Riba Allen. Jacquelyn was truly a servant of GOD. She served in many different capacities from teaching the Word of GOD to spreading the Word of GOD to the unsaved. In Jacque’s deep relationship with God, she served as an ambassador of Christ through her service to her fellow brothers and sisters. Within her church, she was active with the Criminal Justice Ministry which assist families and inmates through prevention initiatives, incarceration and re-entry services. Additionally, she attended training to become educated in the expertise needed to deliver addicts from addictive behavior. Jacque was steadfast in using her gifts toward the edification of the body. She served as a teacher for 20 years with True Love Waits, a program for ages 12-18 which provides workshops, classes, and speakers to teach and encourage youth to remain pure in mind and body (abstinence) until marriage, and with additional service to youth as a Kaleo of Kids Across America for 15 years. Jacque utilized her gifts in service to the Evangelistic Team, as a committed teacher to VBS for 14 years, as the Sunday School Secretary, and sang in the Senior Choir for over 30 years. In a larger body of service, Jacque’s participation with the St. John District Association was long and active. Throughout her engagement with the association, she served as a CityWide Junior Mission Officer and as a teacher for Mission I. Jacque regularly attended the Missionary Baptist General Convention of Texas, where she served as Chair of Missionary Counsel, and as an instructor for the Youth Women and Girl's Convention/MBGCT. Ecclesiastes 9:10 says Whatever your hand finds to do, do it with all your might.” Clearly, Jacque’s hands found lots of work in women’s ministry and she served with might. Among her associations, she was a core member of Sisters Coming Together Inc., a nonprofit organization of “sold out for Jesus Christ“ Christian Women. She served as president of Women's Aglow, was a 2009 Honoree in "Celebrate Me" 3D Women, served as an officer of the Austin Women's Convention, was a member of Hannah & Dorcas Conference, and a Bible Teacher for Women's Ministry throughout the Nation. Additionally, Jacque was a 16 year conference teacher for Single Ladies Auxiliary as well as a faithful core member of Sisters Coming Together. She was selected as a 3D Women in 2017 Distinction, Determination and Destiny. She was employed with the Probation Office, Austin Independent School District as a Substitute Teacher, and with Huston Tillotson University for 30 years as a Dorm Director. GOD established in her life, a firm foundation in CHRIST, and she passes that onto her children, family, friends and all that she met. She was proceeded in death by her husband Johnny Brown Sr., her son Quincy Van Johnson, her father Herbert B. Johnson, mother Ora Lee Whalon, aunt Ethel Lee Whalon, Esther Rae Whalon, Uncle Louis Whalon and brothers Robbin Whalon and Richard Lee Johnson. She leaves to cherish a legacy of love; three daughters, Phyllis Johnson-Watson, Tysha Johnson-Sharper (Aric), Riba Allen, two sons, Darrick Johnson (Colette), Terrance Allen(Zeny), two stepsons Johnny Brown Sr. (Susie), Charles Brown (Sonji), a sister Patricia Ann Johnson, five brothers, Lee Otis Whalon (Patrice), Elmer Terrell, Herbert Ben Johnson (Debra), Marshall Johnson and Alvin Johnson, grandchildren, Jacquell Johnson, D'Arimus Johnson, Jason Johnson, Jalen Allen, Tyce Allen, Savanna Watson, Jasmynn Effiom, Jackson Effiom, Jessica Johnson, Julius Brown-Johnson, Lakeishia Brown, Issac Allen, Salem Allen, Nahom Allen, Johnisha Terry, D'Shone Johnson, Derrick Johnson and a very special niece Teresa Warner(Anthony).

Jacquelyn Allen Brown was the first born to the late Herbert Johnson and Ora Lee Whalon on November 15, 1950 in Jacksonville, Texas. In 1974, she accepted JESUS CHRIST as her LORD and Savior and was baptized by Reverend Dr. G.V. Clark at Mount... View Obituary & Service Information

The family of JACQUELYN BROWN created this Life Tributes page to make it easy to share your memories.

Jacquelyn Allen Brown was the first born to the late Herbert...

Send flowers to the BROWN family.