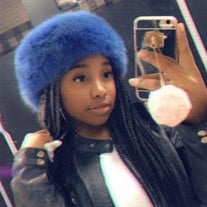 Ivory Lanelle Levine Wilson-Willis was born on November 26, 2001 to Richard Dwayne Wllis II and LaTiffany Yvette Wilson. She was the oldest child of three siblings. As a child she was christened by the late Pastor W.M. Reed. Ivory accepted... View Obituary & Service Information

The family of IVORY LANELLE LEVINE WILSON-WILLIS created this Life Tributes page to make it easy to share your memories.

Send flowers to the WILSON-WILLIS family.