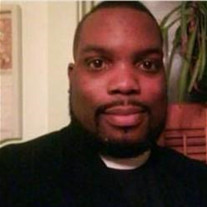 Ira Darden II was born on September 22, 1972 at a naval base in Kittery, ME. Except for approximately four years in Fort Worth, he grew up in the Boston area and Nashua, NH. He was a graduate of Nashua High School. Ira had a special talent and love for building and creating woodwork. He attended classes after graduating from high school to perfect his skills. Much of Ira’s career was spent on construction sites. Before his departure, he was establishing a cleaning business. Ira accepted the Lord Jesus Christ at an early age. He received the baptism of the Holy Spirit at age 7. He loved to pray, praise and worship. He always admired his father, the late Bishop Ira Darden, Sr., because of the anointing on his life. Later, Ira acknowledged his call to the prophetic ministry. Ira was also a part of various prayer ministries from all around the country. He was a renown prophetic prayer warrior during the time of his ministry. Prophet Darden was an honorable man who genuinely loved people. He lived his life as if there were no strangers. He would travel to many places near and far, sometimes without compensation, to minister and speak to encourage the souls. On the last full day of his life, he is noted for ministering with such power and anointing that those who attended his last service will not soon forget. Ira’s last days where filled with love and appreciation for his bride, Selice. They were married on what would be his last birthday on September 22, 2018. They shared a very special life filled with love for God, each other, family and ministry. It was their vision to open a Dream Center here in Austin, Texas to provide hot meals, hot showers, food, clothing, shelter, and medical provisions for the homeless population. This was truly what Ira wanted to establish. He believed that "Everybody was Somebody to God” no matter if they were black, white, rich, poor, if they lived under a bridge or if they lived on top of a hill… “ God is no respecter of persons and he loves us all the same.”, is what he would often say. Ira’s memory will be cherished by his wife; sons: Joseph and Devante, and step daughter Sabri; mother, Beverly Wilson; sisters and brother: Keshah Walker (Perry), LaTanya Brown (Pastor Keith), Karsten Darden and Karma Sykes (Tarik); great aunt, Elizabeth P. Nash, great uncle Elder Charles (Sunny) Patterson (Georgetta), his aunts, uncles and cousins, and his beloved nieces and nephews Constant Hope, Hailey, Alysia, Dominique, Marcus, Joshua, Kaleb, Kyle and (Archie). His presence will be greatly missed by all who knew and loved him.

Ira Darden II was born on September 22, 1972 at a naval base in Kittery, ME. Except for approximately four years in Fort Worth, he grew up in the Boston area and Nashua, NH. He was a graduate of Nashua High School. Ira had a special talent... View Obituary & Service Information

The family of Ira Darden II created this Life Tributes page to make it easy to share your memories.

Send flowers to the Darden family.