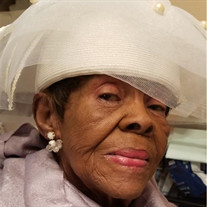 Iowa LaVern Jones Reese was born to Henry Jones Sr. and Jesse King Jones, on March 15, 1930 in Manor, Texas. She began her journey towards God's kingdom at Pleasant Bethany Baptist Church (Elgin, TX) and loved to praise God through prayer and bible study. Her faith in Jesus Christ was steadfast till they very end. Iowa attended Bastrop County public schools until she met the lobe of her life, Rev. Ruben James Reese and married on November 4th, 1947. They were happily married for 62 years. She served by his side as he pastored Cedar Grove Baptist in Granger, TX, where she served for over 40 years. While living in Elgin, Iowa was a Neighborhood Center Director, Nutrition Specialist, Life Insurance Agent, and community activist who would even pick up people and take them to vote. They later made Austin their home and because education was so important to her, Iowa went on to obtain her GED in her forties. She worked for the City of Austin as a Communications Specialist until she retired. Iowa was admired for her class and stylish fashions. She commanded every room that she entered. Iowa was also a member of the Rising Star Ch. 334 - Order of the Eastern Star,. She enjoyed going to garage sales, and cooking, and baking for her loved ones. Her delicious rolls were the best! Iowa's life will forever be cherished in the lives of her loving children; Donald (Teresa) of Round Rock, TX, Margaret Owens (Thomas) of Austin, TX; Sammy (Cheryl) of Bastrop, TX, Verna Cerecerez of Austin, TX; sister Betty Jones of Portland , OR; grandchildren, Havean, Bristol. Tasha, Terrance, TJ. Kami, Ronson, Markisha, Kendra, Ray, Janell, Tajah; Great-Grandchildren, Arayyla, Rheagan, Alayna, Alexandria, JaLynn, Tierra, Kenneth Jr., and Kyro. Proceeding her in death are parents; Henry Jones, Sr. and Jesse King; husband, Rev. Ruben J. Reese; brothers Henry Jr., Oliver, Leo, and Maurice; sister Joyce Walker; son in lay, Raymond Cerecerez.

The family of Iowa LaVern Reese created this Life Tributes page to make it easy to share your memories.

Send flowers to the Reese family.