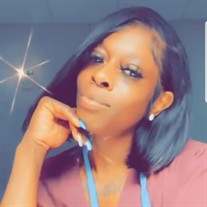 https://livestream.com/accounts/7325565/indiamckinley Ms. India Deshaun McKinley was born September 7, 1985 to Gloria Carthorne and David McKinley Jr. in Austin, Texas. She accepted Christ early in her life while attending First Baptist Church on Heflin Lane. India attended school in the Austin Independent School District. She was most proud to be a Reagan Raider graduating from John H. Reagan High School. At Reagan, she was also part of the JROTC, track, and cheerleading teams. After graduating in 2003 she attended Virginia College in Austin Texas, and began her medical career at Brackenridge Hospital. She excelled in her work as a Clinical Assistant and was beloved by all whom she came in contact with. At Dell Seton Medical Center she was known to be compassionate about her patients, being devoted and caring about the care she was giving. She made sure that she greeted each person with high energy and love. She was loved by all. May 22, 2010 she gave birth to her pride and joy Ka’Von Dewayne Jackson, whom she was most dedicated to. She wanted to give, and show him the world−and she did. Everything she did in life was for him; her twin. Greeting her in heaven are her father: David McKinley Jr., maternal grandparents: Lucille and M C Carathers, maternal great grandmother: Truzell Swift, paternal grandfather: David McKinley Sr., maternal great aunts: Gloria Savannah and Dorothy Johnson, maternal great uncle: Carl Savannah. She leaves to cherish her memory on earth her son: Ka’Von Jackson, mother: Gloria Carathers, brothers: Andre Carathers and Lamonte Carathers, paternal grandmother: Mary McKinley, aunt: Theresa Carathers, best friends: Dominic Bellinger-Nelms and Stephanie Jones, and a host of cousins, nieces, nephews, and friends.

The family of India Deshaun McKinley created this Life Tributes page to make it easy to share your memories.

Send flowers to the McKinley family.