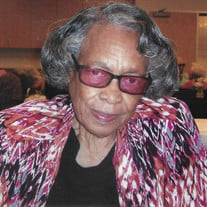 https://livestream.com/accounts/7325565/homagordon https://www.flipsnack.com/alcbf/homa-gordon.html Reflections of Life: Homa was a woman of noble character with many faces. She filled many roles that could change with the seasons of her life. In essence, she drew her strength from the Lord to lay down her life for those she loved. Her creative industry filled her days either with countless activities or only one or two to which she gave herself deeply. Her reward was that her children adored her. Homa Jean Hardaway Gordon was born in Gonzales County, Texas on January 14, 1930. She was the third child of Minnie Hardaway. She grew up in the Hood’s Point Community where she attended Hood’s Point CME Church. The foundation of all she learned was created in the small CME Church where the Sunday school lesson was taught from cards and leaflets with reference to the Holy Spirit. After moving to Luling, TX, Homa, as her friends called her, was a member in good standing at William Taylor Methodist Church and was also a member of the youth choir. At the time of her death, Homa was a member of Diakonos Church - A House of Servants, in Austin, Texas, pastored by A.J. Quinton, Jr. She attended the Gonzales Area Public School nestled in the beautiful countryside. After completing the prescribed number of hours, she moved on to attend Rosenwald High School in Luling, Texas. After completing all requirements, she graduated at the early age of sixteen years old. Following her mother’s footsteps, she entered Huston-Tillotson College in Austin Texas. Completing four years and one summer, she earned a Bachelor of Arts degree in 1953 from what was later named Huston-Tillotson University. She also attended Southwest Texas State where she earned twelve extra hours. Homa dedicated her career working with the “young child” at Oak Springs Elementary School in the Austin Independent School District. She taught for long terms at Manor Elementary School in the Manor Independent School District and short terms at Simms Elementary School in Austin Independent School District. Under the Head Start program, she worked at the Ebenezer Child Development Center, Child Inc. Centers, Montopolis Development Center and Rosewood Development Center. The most promising and rewarding work that she loved was joining the Foster Grandparents Program where the main purpose was working with special needs children. At Harris Elementary School in the Austin Independent School District she earned many hours of volunteer time. Many rewarding days were also spent at True Light Day Care Center with two and four-year-old children. Homa Jean Hardaway Gordon has five sons, Richard A. Askey and Michael T. Gordon - whom preceded her in death. Her surviving sons are James E. Gordon, III, Kenneth D. Gordon, and Jacques D. Gordon. Her five boys cherished her company, trusted her judgement, and bragged about her to all their friends. She will be remembered long after she is gone, not only as a woman who gave more than she had, but also as a woman who sought the Lord first of all. Homa Jean was preceded in death by her mother, Minnie M. Hardaway, her father, Homer Jones, two sisters: Ruby D. Freeman and Callie B. Hardaway, one step-sister, Lena P. Hodge, and one step-brother, Hubert and Homer Jones, Jr. She also had one grandson preceded in death, Jeremy Evans. Homa leaves to cherish her memory, step-brother, Albert Clark; three sons: James E. Gordon, II, Austin, TX; Kenneth D. Gordon (Georgia), Luling, TX, and Jacques D. Gordon (Mikki), Pflugerville, TX and daughter-in-law, Chris Gordon. She leaves the cherish seven grandchildren: Angela Askey, Steven Askey, Stephanie Askey, Jerome Evans, Natasha Gordon, Kaylah Burton and Joshua Gordon. Homa also leaves a host of great and great-great grand-children, along with many nieces, nephews and cousins.

https://livestream.com/accounts/7325565/homagordon https://www.flipsnack.com/alcbf/homa-gordon.html Reflections of Life: Homa was a woman of noble character with many faces. She filled many roles that could change with the seasons of her life.... View Obituary & Service Information

The family of Homa Jean Hardaway-Gordon created this Life Tributes page to make it easy to share your memories.

Send flowers to the Hardaway-Gordon family.