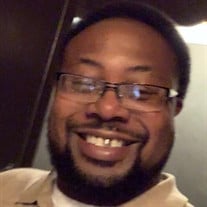 Herman Lee Taylor, Jr., 46 years of age, passed on Tuesday, December 31, 2019, in his home in Oakdale, Minnesota. Herman, Jr was born December 21, 1973, in Austin, TX to Herman Lee Taylor, Sr, and the late Willie Jean Barnes-Taylor. He was the oldest of 3 siblings. He was very protective of his siblings. He took his role of big brother very seriously and would let everyone know. He was a true friend and never met a stranger. Herman Jr, was a graduate of Pflugerville High School in Pflugerville, TX. In 1992, he joined the Air Force and was assigned to Lackland Air Force Base in San Antonio, TX. After completing basic training in 1993, he was stationed at Minot Air Force Base in Ward County, North Dakota. He was discharged with full honors in 1994. Years later, he studied to become a network technician and worked in the IT industry until his passing. He loved working for the 3M company in Austin, TX and volunteering in the community with his co-workers. Herman, Jr was presented with an opportunity to transfer to the 3M headquarters in St. Paul, Minnesota. He was hesitant to leave his kids, family, and friends however he believed it was a step in the right direction for his career. Being a true Texan, he was not prepared for those cold, frigid winters. To feel more at home, he wasted no time flying his children to enjoy his first few months and experience the wintery snow of Minnesota. His favorite time of the year was Autumn and he was intrigued by how colorful and vibrant the leaves on the trees were. As a child, Herman, Jr loved the outdoors, camping, fishing, and going to the beach. He loved playing basketball and football with neighborhood friends and in high school. He was a vital contributor as a cook, server and cleaned at the family-owned bbq restaurant at an early age. Herman, Jr caught the entrepreneur bug and became known as “The Candy Man” in high school by buying candy wholesale and selling it at school for profit. Herman, Jr loved his children, spending time with family, rooting for his Texas Longhorns and the Dallas Cowboys, laughing and always wearing a smile on his face. He was a loving and caring person, devoted father, son, brother, and friend, always thinking of others first. Herman, Jr married Anna Riggs in May 1999 and two children were born from this union. Herman, Jr soon fell head over heels with his now fiancee, Katrina Coffey. He was proud to introduce his children to Katrina and her beautiful daughters, Audriana and Gabrielle Ware. Recently, sharing a memorable Thanksgiving as a blended family of 6. Herman, Jr. was preceded in death by his mother Willie Jean Barnes-Taylor; grandmothers Bernice Taylor and Norma Jean Barnes; grandfathers Earnest Taylor, Jr. and Willie Barnes;. Herman, Jr leaves to cherish his loving memory with ; his parents, Herman Taylor, Sr. (Regina),(Austin,TX) and Arlette Peterson Taylor(step-mother)(Cedar Creek, TX); his children, Issac and Janae Taylor (Pflugerville, TX); his siblings - brothers Theron (TJ) Taylor(Austin, TX), Clifford (Money)Barnes (Taylor, TX) and baby sister Ashlee Shuler (Katy, TX); his nephews, Mekai and Kyrie Shuler (Katy, TX); Clavon, LeBryant, and Malik Barnes (Taylor, TX); his grandmother Alta Barnes(Austin, TX) and Dorothy Peterson (Bastrop, TX and many uncles, aunts, cousins, and friends.

Herman Lee Taylor, Jr., 46 years of age, passed on Tuesday, December 31, 2019, in his home in Oakdale, Minnesota. Herman, Jr was born December 21, 1973, in Austin, TX to Herman Lee Taylor, Sr, and the late Willie Jean Barnes-Taylor. He was the... View Obituary & Service Information

The family of Herman Lee Taylor Jr created this Life Tributes page to make it easy to share your memories.

Send flowers to the Taylor family.