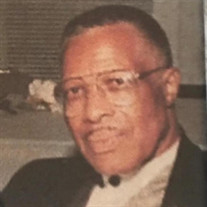 https://livestream.com/accounts/7325565/henrymackey https://www.flipsnack.com/alcbf/henry-mackey.html “For whether we live, we live unto the Lord; and whether we die, we die unto the Lord: So, whether we live therefore, or die, we are the Lord’s.” Romans 14:8 Henry Arthur Mackey Sr. was the last child born on September 10, 1934 to the late Johnnie Mackey and Laura Clark Mackey. Henry accepted Christ at an early age and was baptized. Henry attended public school in Utley, Texas. After high school, he moved to Wichita Kansas and lived there for several years. Upon his return to Texas, Henry married his longtime love, Roberta Harris and to this union six children were born. Henry was a true family man. Always doing whatever it takes to provide and care for his immediate and extended family. Whether it was working professionally as a print operator at the State Comptroller of Public Accounts for twenty nine years (retired), or performing skilled carpentry, auto mechanics, gardening, or cooking, Henry was always humbly serving and giving his all. Henry united with Rising Star Baptist Church under the leadership of the late I.W. Robinson. Henry served faithfully in the choir, brotherhood, and Chairman of the Deacon Board until his health began to fail. Our beloved Henry made his life transition on February 2, 2021. Henry was preceded in death by his parents, brothers Booker, John, Vivian and J.D. Mackey, his sisters Bernice, Earlene, and Dorothy, his son James Mackey, daughter Linda Mackey Fowler, and grandsons Edward Taylor Jr. and Joshua Moore. He leaves to cherish his memory his wife of sixty-three years Roberta, his children, Henry Jr., Debra (Richard), Tracey (Robert), Gwendolyn, Wanda (daughter-in-law) and Alecia (Gerald). His sisters Gladys Washington and Louree Atkins. His grandchildren, James, Sujuane (Brandon), Robert Jr., Isaiah (Myilette), Matthew, Teresa, Keith, Edna, Charles, and Amani. Also, thirteen great grandchildren and a host of nieces, nephews, cousins and friends.

The family of Henry Mackey created this Life Tributes page to make it easy to share your memories.

Send flowers to the Mackey family.