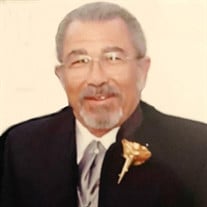 Henry Gibson was born on September 24, 1939 in Los Angeles County to the late Pratt Gibson and the late Corinne Bilbrew. He received his education in the Austin Public School District and later went to work for the Austin American Statesman Newspaper as an Assistant Supervisor in the Mailroom department and retired after 38 years of service. Henry believed and professed Christ as his Lord and Savior and united with David Chapel Missionary Baptist Church. He was baptized on January 7, 2007 by Pastor Joseph C. Parker Jr. Henry was a devoted Husband and Father, he loved his wife whom he affectionately called “Honey” and was married to for 64 years. Henry loved his Mother-In-Law (the late Luella Burse), whom he shared a special bond. She played a vital role in his life. Henry took being a father seriously, and always wanted the best for his children. He wanted to make sure they succeeded in all aspects of life. He continuously instilled in his family, “knowledge is something that no one can take away from you.” He would take his children to caverns, museums and anything that would further their knowledge. Henry would always make sure he took his family on a vacation every summer and they especially enjoyed the trips to Corpus Christi where he could teach his kids to fish. Henry aka “The Professor”, aka “Yellowrose”, prided himself on hard work and education; always pushing himself to learn new things. You could find him reading Popular Science and Auto Mechanics, or watching The History Channel, National Geographic and Mysteries of the Bible. His motto was, “learn all you can” and he did just that! There was NOTHING that he couldn’t do, and he loved sharing his knowledge with anyone who would listen. If you visited the Gibson home you were sure to get Love, a hot meal, computer lessons and much more! Henry had many hobbies - fishing, hunting, oil painting, singing, teaching and talking on the CB’s to name a few. He loved to work in the yard planting beautiful roses and other assorted flowers. Henry was very skillful and amazingly blessed with his hands! He built room additions, built and troubleshooted computers and worked on cars. Henry LOVED his minerals and was a member of the Austin Gem and Mineral Society. Henry was preceded in death by his parents, Mr. Pratt Gibson and Corinne Bilbrew, sister Florence Ross, brother David Bilbrew and daughter Roxann Clark. His memories will forever live in our hearts. His wife Beatrice Gibson, his children, David Gibson (Terri) of Sacramento, Ca., Tenya Williams of Austin, Tx., his grandchildren Johnny Clark Jr. (Tamiko) of Houston, Tx., Latara Clark, Roxann Richardson, LaTesheia Williams, all of Austin, Tx., Ryan Gibson, Cory Gibson, of Sacramento, Ca., Joshua Williams (Toshya) of Honolulu, HI., Sixteen Great Grandchildren and Nine Great Great Grandchildren, nieces, nephews, cousins and a multitude of extended family and friends. https://livestream.com/accounts/7325565

Henry Gibson was born on September 24, 1939 in Los Angeles County to the late Pratt Gibson and the late Corinne Bilbrew. He received his education in the Austin Public School District and later went to work for the Austin American Statesman... View Obituary & Service Information

The family of Henry Gibson created this Life Tributes page to make it easy to share your memories.

Send flowers to the Gibson family.