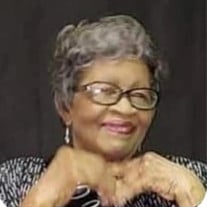 https://www.flipsnack.com/alcbf/hazel-edwards.html Hazel Berneice Landren Edwards was born on January 28, 1929, to Luther and Pearl Landren in St. Mary Colony, Texas. She was also reared in St. Mary Colony and Austin, Texas. She departed this earthly life on December 3rd, 2021. She accepted Jesus Christ as her Lord and Savior and was baptized at an early age and became a member at the St. Paul Baptist Church in Austin, Texas. Hazel was active in Sweet Home Baptist Church and St. Mary Missionary Baptist Church. She continued her faith walk with the Lord; when she became a member at Mount Sinai Baptist Church, under the leadership of Pastor A. W. Anthony Mays, she was elected to serve as the Senior Mission President. She attended school in Austin, Texas and then went on to complete her Nurses Aide certification. She was united in marriage to Hugh Urdy, and to this union two children were born, Annie Berneice Urdy Dawson and Fannie P. Urdy Mays. On October 21, 1950, she united in marriage to Louis Edwards Sr. and to this union six children were born: Louis Edwards Jr., Nora Johnson, Mary E. Hair, Curtis Edwards, Lula Bailey and Vietta Edwards. She welcomed and loved three children: Laverne Wilson, Gladdys Austin and Charles Edwards from his previous marriages and together they were blessed with eleven children. She held multiple positions such as working at a dry-cleaning company as well as working as a maid and a caregiver. She enjoyed helping others so much that she later became a Nurses Aide. Hazel is most remembered for her selfless love for others. She was known as a great cook, and everyone loved to socialize at her home in Kings Village. Hazel was preceded in death by her parents, her husband, Louis Edwards Sr. and her daughters: Laverne Wilson, Gladdys Austin, Annie Dawson and her son Louis Edwards Jr. and five sisters: Beulah Sterling, Fannie Mae Taylor, Rose Lee Gray, Frances Brazil and Annie Ruth Johns and one brother Ben Troy Sneed. She is survived by her one sister, Willie Gene Denmon, and children: Fannie Mays (Anthony), Nora Johnson, Mary E. Hair, Charles Edwards (Wanda), Curtis Edwards (Vivian), Lula Bailey, Vietta Edwards, and her 48 grandchildren, a host of great and great-great-grandchildren, nieces and nephews. She leaves to cherish her family and her lifelong friends Mercie Gonzales, Goldie Freeman, & Lora Levels

The family of Hazel Berneice Edwards created this Life Tributes page to make it easy to share your memories.

Send flowers to the Edwards family.