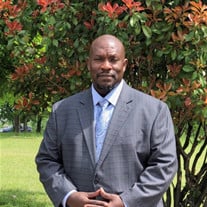 Harold Maurice Hall, Jr, was born in Austin, Texas on April 14, 1963 to Elise and Harold J. Hall, Sr. Harold attended Pecan Springs Elementary School, Pearce Middle School and he completed his formal education at the L. B. J. High School. Harold served In the United States Army from November 1982 to September 1992. He began his 25 year career with the United States Post Office on June 11, 1994. He has been a pastor at Crossroads Christian House of Prayer for more than 20 years. Apostle Hall started in ministry in Heidelberg, Germany at Patton Christian Fellowship where he was first licensed and ordained as a Deacon in the ministry in 1989. The Lord spoke to him and he started his first prison ministry while there in Germany, at Patton Christian Fellowship, in the Mannheim prison facility. Then the Lord called him to walk as an Evangelist where he was licensed and ordained in 1991. The Lord had him to leave Germany and return to Austin, where he was led by the Lord and started several prison and prayer ministries. Then the Lord had him to turn them over to other faithful men of God. He was licensed and ordained by Apostle Elijah Holland at God’s Power and Christian Fellowship as an Elder in the ministry. In 1998, God sent him to pastor Crossroads Baptist Church which is now Crossroads Christian House of Prayer. The following year he was licensed and ordained as a Pastor by his Pastor, Apostle Anthony T. Mays. While pastoring, he has received his Pastoral certification through the SBGT seminary school. He is a certified Christian counselor, through the Texas State Board of Counselors. He is a certified Chaplain. Apostle Hall is in covenant with Apostle Randy Brown of Bread of Life Ministries from Babylon, NY. He has also had the opportunity to travel and minister in several countries in Africa, and other places throughout the U. S. In 2007, he was consecrated to the office of Bishop by his spiritual father, Dr. Anthony T. Mays. He received his Doctorate in 2013. Then consecrated by Dr. Anthony T. Mays, to the office of Apostle in 2014. Dr. Harold Maurice Hall, Jr., Apostle and Pastor of Crossroads Christian House of Prayer is a man who strives to love God with all his heart, mind, body, soul, and strength, that he may be a man after God’s own heart. Along with his duties as pastor, he was also affiliated with ~ The Austin Baptist Association (ABA)~David Smith; The Southern Baptist Convention (SBC) Dove Springs Pastors with River City Youth Foundation--Mona Gonzalez; United Fellowship Unceasing Prayer ~Trey Kent; National Day of Prayer Austin Prison Ministry ~Federal, State, & County; Waymakers ~Steve Hawthorne Texas Reach Out ~David Pena; Intercessors of America Harold was preceded in death by his parents, Harold M. Hall Sr. & Elise Sirles Hall. He leaves to cherish previous memories; his wife, Donna Michelle Houston Hall; children Joshua Hall, Princess Hall; step children, Dominique, Donyell & Dorien; his siblings, Anita Rae Hall, Donald Hall, Everett Hall Sr. (Valerie); Mother in law, Johnnie M. Houston, brothers-in-law; Clayton Houston (Beverly), Vincent Houston (Pamela), Darrell Houston, sisters-in-law Sandra Claiborne and Marcia Houston; nieces; Marlene Roberson, Latisha Hall, Le' Edna Jones, Le' Nita Jones, Shannon Hall; Great Nieces; Jalasia Lee, Eryn Weatherspoon; nephews; Everett A. Hall Jr, Kenneth W. Jones, Arthur L. Jones, Wesley Jackson, Christian Hall; great nephews; Quentio Murray, Emory Weatherspoon; and a hosts of aunts, uncles, cousins & friends.

The family of Dr. Harold Maurice Hall Jr. created this Life Tributes page to make it easy to share your memories.

Send flowers to the Hall family.