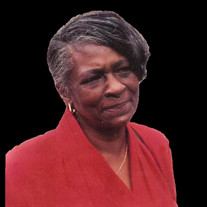 Georgia, also known as, “Bawly” or “Bo-Bo”, was born the fourth child to orange Easley and Mary Jones-Easley in Manor, Texas on June 19th, 1932. Georgia attended Manor Independent School District, and later earned her certification as a CAN. She was employed at Austin State Hospital for 15 years. She was a loyal aide and companion to Mr. & Mrs. Curtis Schmedes for over 23 years. At an early age in Texas, she accepted Christ as her Lord and Savior where she united with the Church of the New Testament. Like many young girls who fall in love, she dated and then married James Earl Franklin, Sr. (nicknamed Pa) the son of the late Rev. E. M. Franklin, Sr. in 1951. Their relationship continued when James convinced her that living outside Texas might enhance their relationship. Thus, they moved to Los Angeles, California. Life went well for them in Los Angeles as the economy was down and her husband found work immediately. Georgia, of course, was a stay at home mom who took excellent care of her family. While in Los Angeles, she continued to practice her faith through Bible study with the family of a minister, who owned the apartment where she and Pa resided. She also attended his church as often as possible. Upon her return to Texas years later, she reunited with the Church of the New Testament where her uncle, Rev. Bill Jones, was pastor/founder. She faithfully served in many ministries there until her health began to fail. “Who can find a virtuous women? For her price is far above rubies. Strength and honour are her clothing; and she shall rejoice in times to come. She openeth her mouth with wisdom: and in her tongue is the law of kindness. She looketh well to the ways of her household, and eateth not the bread of idleness. Her children rise up, and call he blessed: her husband also, and he praiseth her.” Georgia honored her Lord Jesus Christ by serving others, never turning anyone away needing food and shelter. It was not uncommon for her to bring home a total stranger from church or work to feed, clothe and to meet their every need. After a lengthy illness, on the morning of December 10, 2018, God called her home to be with Him. She is preceded in death by her parents Orange and Mary Easley, two (2) sons Roderick and Paul, five (5) siblings: Dorothy, Wilbert, Margaret, Emma and Ira. Her life will be remembered and honored by her seven (7) children who are left to carry on her legacy: James, Jr, Cedric, Gary (Pam), Tamara , Marcella (Oscar), Maurice and Lottie; 21 grandchildren; 38 great-grandchildren, and 11 great great-grandchildren; siblings – Gertha, Ray, Hester, Elizabeth, Bernadette, Macky, and Orange, Jr.; a host of nieces, nephews, relatives and close friends.

The family of Georgia Lee Mitchell created this Life Tributes page to make it easy to share your memories.

Send flowers to the Mitchell family.