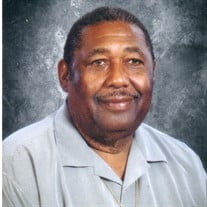 George Wilson Clack was born on January 19, 1942 in Gonzales, Texas to the late Hosie Clack and Bertha Hodge. He attended the Gonzales Public School System where he excelled in basketball, baseball, and track. He graduated from Edward High School in 1961, having received an athletic scholarship from Huston Tillotson College, George moved to Austin to begin his future. On August 30, 1968 he was wed in holy matrimony to Annette Isabel Bailey to this union four children were born. He professed his faith in Christ at an early age at Little Hill Baptist Church in Ottine, Texas. After participating and experiencing the Catholic faith through his daughter’s first communion, he converted to Catholicism. He was employed at First Texas Savings for over 20 years where he was the Facilities Manager. During this time, he also worked at and ran programs for the City of Austin Parks and Recreation Department at Rosewood and Doris Miller. It was here he begin a legacy of community development in East Austin. He was employed with Austin Independent School District for 18 years where he loved teaching and coaching. He touched the lives of many youth through his work at the Alternative Learning Center, Lamar Middle School, and his involvement in the Boys and Girls where he earned a tremendous amount of respect from all. The “Gentle Giant”, often described as “Old-School” was a strong believer in “It takes a village”. He was not afraid of being a part of that village. Affectionate and loving but not afraid of tough love. He is preceded in death by his parents, brothers: Earnest, Willie George, Bobby Joe, Tommy Lee and one sister Geneva Morrow. He leaves to cherish his memory his loving wife of 49 years, Annette; daughters Charlotte (Fred), Nichelle, Stacey (Hubbard), Rhonda and his pride and joy son Kristopher; nine grandchildren Quinton, Kiaom, Tralon, Trevoi, Brandon, Cameron, Kristian, Jade and Jemma; nine great-children Malakhi, Jeremiah, Genesis, Emmanuel, Kiona, Kaliyah, Devon, Summer and Mekhai; four sisters, Georgia Mae Butler; Olivia Harrison (Jim); Earlene Steen; Barbara Ann Cubit (Leland) and a host of nieces, nephews, great nephews, great nieces, and relatives. George enjoyed spending time with family and friends, working in the yard, watching politics, and sports especially the Dallas Cowboys.

George Wilson Clack was born on January 19, 1942 in Gonzales, Texas to the late Hosie Clack and Bertha Hodge. He attended the Gonzales Public School System where he excelled in basketball, baseball, and track. He graduated from Edward High School... View Obituary & Service Information

The family of George Wilson Clack created this Life Tributes page to make it easy to share your memories.

Send flowers to the Clack family.