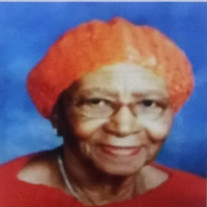 Frances Juanita Montgomery was born on Thursday, January 15 in Jacksonville, Texas to James Wesley Montgomery and Ima Tillman Montgomery. She departed this life on Tuesday, January 14, 2020; one day before her 98th birthday in her home. Frances finished her formal education in Jacksonville area and with a lesson from her grandparents that she should not rely on others for survival she moved to Austin and acquired a job and a place to live. It was during her stay in Austin that she would capture the eye of a young airman from Arkansas named Edward Lanos. After several attempts he convinced her to go on a date, which culminated in marriage on May 26, 1957. They celebrated their 50th Wedding Anniversary by renewing their vows on May 26, 2007. Her beloved Edward passed on June 22, 2007. In Austin Frances showed that she was not afraid of employment at the following capacities: as an elevator operator at the T.H. Williams Department Store (located at 5th and Congress), maid at the Driskill Hotel and finally as a EKG Technician for Dr. Henry Renfert, Jr. at the Austin Diagnostic Clinic from which she retired. Following retirement Frances and Edward were caretakers for Dr. Renfert until his passing in January of 2003. Juanita gave her life to Christ as her Savior; in Austin she and Edward made the Olivet Baptist Church their place for spiritual growth. Upon Edward being ordained a Deacon she became a Deacon’s Wife. She served as the president of the Deacon’s Wives for number of years and received a plaque for her dedicated service on September 20, 2009. Frances also was active in the Lydia Circle before the late Pastor L.V. Wicks merged the women into the WMU, the Sunday School and Bible Study. Her favorite Bible verse Luke 6:31, “Do unto others as you would have them do to you.” Ultimately lead to her becoming a volunteer in the Helping Hand Ministry. She was a member of Olivet Church Family for more than 60 years. Juanita proved herself to be superior when it came to crocheting, and many people benefited from the wraps, scarfs, and bedspreads and hats that she made. She had the gift of hospitality and loved sharing with others. Juanita leaves to cherish her memories her God Nephew and Niece Barry and Marie Franklin, her brother Norris Montgomery, numerous other cousins and loving friends. Special thanks to care givers Joyce Simmons, Sammy Young Manor, Trevor and Amy Allen and the entire Olivet Baptist Church Family for your support continuous love and support.

Frances Juanita Montgomery was born on Thursday, January 15 in Jacksonville, Texas to James Wesley Montgomery and Ima Tillman Montgomery. She departed this life on Tuesday, January 14, 2020; one day before her 98th birthday in her home. Frances... View Obituary & Service Information

The family of Frances Juanita Lanos created this Life Tributes page to make it easy to share your memories.

Frances Juanita Montgomery was born on Thursday, January 15 in...

Send flowers to the Lanos family.