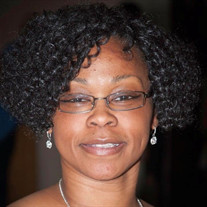 Erica Dionne Jerrells was born on July 15, 1975, a daughter of Sandra (Overton) Doyle and the late Freddie Jerrells; and “James Doyle is my Pops!” Erica attended Maplewood E.S. and Keeling M.S. in Austin ISD and later transferred to Del Valle High School, Del Valle ISD, where she made many lifelong friends. Erica continued her studies at Herzing University where she was scheduled to graduate in April of 2020 with a degree in Business Administration. Erica was always considered an old soul. Being such, it was no surprise that she received Christ early in life and was baptized at the tender age of 6 by her grandfather the late Rev. W.C. Steele, under the auspices of the late Rev. E.M. Franklin. Erica was a faithful member of the St. James Missionary Baptist Church, where she worshipped the Lord with gladness her entire life! Erica, also known as “Choir Girl,” loved to sing! She developed her love for singing as a member of the St. James Youth Choir and the Voices of Christ Community Choir under the direction of Directress Claudia D. Williams. As a strong alto, with an Angelic voice, she led many songs. While she was spiritually moved by many gospel artists and their music, her favorite song was “It’s Done” by Anita Wilson. Through her love for her Lord and singing, she committed herself in loyal service to all of her choirs including the St. James Praise Team, the Women’s Chorus and the Mass Choir until her passing. While love is one thing, passion is another. Erica was passionate about event planning and organizing; so much so that she studied in the field and earned an Event Planner Certificate. If you ever needed an expert to plan your party or church function, look no further than Erica Jerrells. Not only was she the professional that you needed, she was the ultimate professional who gave you 100% of her time and talent and did it with a smile! She was employed at Seton Medical Center for 16 years in the field of billing, where she applied her organizational skills and kept your account in check! Erica was preceded in death by her father Freddie Jerrells; her maternal grandparents, First Lady Mary (MeMe) Steele and Rev. William C. (PaPa) Steele; and her paternal grandparents Mr. and Mrs. Aaron and Mary Jerrells. Erica leaves to cherish her precious memory her parents Bro. James “Jamie” Doyle and Sis. Sandra (Overton) Doyle of Austin, Tx., her Special Friend Bro. Eric Bunch of Round Rock, Tx., brother Rev. James Ryan Doyle (Krystal) of Cypress, Tx., sister Sheila Doyle of Lewisville, Tx., sister Dawn “Dada” Rhodes (Paul) of Austin, Tx., uncle Darrell Overton (Felicia) of Austin, Tx. and her “Fur Babies” Yedah and Meelah; along with a host of aunts, uncles, nieces, nephews, cousins and friends.

The family of Erica Dionne Jerrells created this Life Tributes page to make it easy to share your memories.

Send flowers to the Jerrells family.