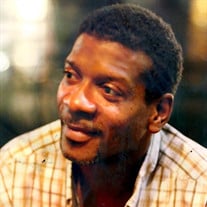 Born: August 12, 1966- Fort Worth, Texas Died: November 22, 2018- Austin, Texas Jerome was nurtured and raised by his loving grandmother and constant companion, Susie Emma Sansom- Piper and his great-grandmother Eula Bell Moultry from the age of 3, due to his mother’s (Eula Ammie Hebert) untimely death in a car accident. He was baptized at the Ebenezer Baptist Church in Austin, Texas at the age of eleven. Jerome was a member of the New Light Ebenezer Baptist Church until his pre-teens and then the St James Baptist Church until his demise. He was always active in the church choirs. Until his illness, he sang with the B.W. McClendon Goldenaires Senior Saints choir. Jerome grew up in Rockdale Texas where he graduated High School with honors in 1984. While in high school, he was active in the marching and symphonic bands. He also excelled in theatre arts while in school, singing and acting in plays such as “The Crucible”, “The Freeman”, and “O Holy Night”. Jerome was also a member of the Rockdale Community theatre group and also participated in various plays such as “Julius Caesar”, “The Betrayal of Judas”, and others. Jerome went on to attend the University of Texas (Austin) on a Texas Achievement Award Scholarship. He also attended Huston -Tillotson College. While in college, he sang in the Austin City- Wide Chorus and the UT Innervisions of Blackness Gospel Choir. Jerome was always gregarious, kind- hearted and truly loved people. He was really a jack of all trades with a brilliant mind. He could fix almost anything he put his mind to. He was also an avid reader from an early age and could hold a conversation with anyone on any subjects. He could tell you almost every word in the dictionary and their meanings. He loved to cook and was often found cooking for his grandmother or baking for the holidays. His love for music and theatre served him throughout his adulthood where he worked at Esther’s Follies Comedy Club for seventeen years. Jerome enjoyed working with his grandmother to publish the monthly St James Newsletter, and designed the photography graphics for the paper. He had a deep love for the elderly and was often found helping the senior saints at church. He also spent some time working in nursing homes as a Certified Nursing Assistant. During his last days, even with his delicate health, Jerome tried to assist others at the skilled nursing center where he was receiving treatment. He always had a kind heart and rarely was found in a foul mood. When others hurt him or were unkind to him, he always found a way to keep smiling. He lived and truly set the example for all of us to follow: “Do unto others as you would have them do unto you.” Luke 6:31. Jerome would give people the shirt off his back, even when he may not have for himself. His greatest joy was his strong relationship with Christ. He would often say “God keeps on blessing me and I love him. He has been So Good to Me… I am not ashamed to say I love him, I LOVE HIM”. Jerome was preceded in death by his mother, Eula Ammie Hebert; Grandfather Emzy James Sansom; Step-Grandfather Rev. John A. Piper; Grandparents Georgia and George Richards; Great-grandparents Eula Bell and Julius (Bose) Moultry; and treasured Uncle, Jamie Richards (Sandra Lou). He leaves to mourn, his loving grandmother (Mama) Susie Sansom-Piper; Sister-Tamara S. Powell (Marcus), Niece Brittany Norris and her daughters Kianna and Brianna, Aunt and Uncle- Barbara and Welton C. Holsome; First cousins -Cynthia Scott(Jerome), Welton C. Holsome II., and Anthony Holsome, Great Aunt Ruthie Mae Boney; and extended family Reese Griffin and her daughter Tiffany; Michael Branon; and the Esther’s’ Follies crew; and a host of other loving cousins, family members, and long-time friends. .

The family of Emzy Jerome Hebert created this Life Tributes page to make it easy to share your memories.

Send flowers to the Hebert family.