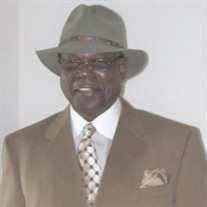 Mr. Elwood “Chyef” Wilkerson was a cherished husband, loving father and friend to all was born October 24, 1937 in Houston Texas to the late Nesby and Rosa Lee Wilkerson. He entered into eternal rest on May 17, 2021 at his home in Leander TX. Elwood attended public school in Harris County and graduated from Jack Yates High School in 1956. He then later joined the U.S. Army in November, 1961 where he served for 25 years and retired as a Chief Warrant Officer (CW3) in June 1985. During his tenure in the U.S. Army he received numerous decorations, medals, and campaign ribbons (Bronze Star, Army Commendation Medal 2d oak Leaf Cluster, Good Conduct Medal, Vietnam Service Medals for 4 Campaigns and National Defense Service Medal, just to name a few). After retirement from the Army he enjoyed serving in the food service industry until he retired in 2015 as Food Service Director. He was always willing to share his expertise with others which sometimes lead to him traveling to other cities and states to train other Food Service Managers and Directors. Elwood was always the cool, calm and collected person who had a “Million Dollar Smile” that won over anyone who met him. Elwood accepted Christ as his Lord and Savior and was baptized at Good Hope Baptist Church, Houston TX. He was an active member of Trinity East United Methodist Church while living in Houston TX and St. Peter’s United Methodist Church (UMC) in Austin TX. He served in various capacities at both churches. He served as Chairperson of Trustee and Chairperson of The Staff Pastor Parish Relations Committee. He faithfully enjoyed fellowshipping with his church family especially the United Methodist Men. As part of his favorite past-time he was glued to the television watching Judge Programs or Westerns. Elwood was preceded in death by his parents and sister Helen Wilkerson. Those he leaves to cherish his sweet memories, his loving and devoted wife Regina Jones Johnson, Daughters: Regina Hightower (David) of Arlington TX, Michelle Parker (Michael) of Atlanta GA; Sons: Daryl Wilkerson (Diane) of Chicago IL, Kevin Wilkerson (Theresa) of Chico CA, Step-Son Charles Lavell Johnson (Becky) of Euless TX; Half Sister: Linda J. Wilkerson of Greenville TX, Niece: Patrice Bell of Houston TX and great niece Rosa L. Wilkerson; Brother-in-Laws: Earnest P. Jones (Sally) of Centerville TX, Steven A. Jones of Dallas TX, Vallieroy P. Jones of San Francisco CA. Grandchildren: Tony Hightower, Allison Hightower, Daryl Wilkerson, Jr. (Jessica),Talysha Wilkerson, Keysha Wilkerson, Great grandchild: Reece, Isaiah and Trevor Wilkerson, A host of Second Cousins who loved him so much and were so close to him that they were more like Nephews and Nieces and they called him “Uncle Elwood”. A special person to him was Kimberly Bonner Thomas (niece/cousin), and last but not least a loving St. Peter’s United Methodist Church family and friends.

Mr. Elwood &#8220;Chyef&#8221; Wilkerson was a cherished husband, loving father and friend to all was born October 24, 1937 in Houston Texas to the late Nesby and Rosa Lee Wilkerson. He entered into eternal rest on May 17, 2021 at his home in... View Obituary & Service Information

The family of Elwood Wilkerson created this Life Tributes page to make it easy to share your memories.

Send flowers to the Wilkerson family.