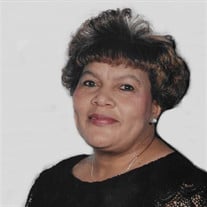 Elois was born on December 14, 1949 in Taylor, Texas to John D. Collins, Sr. and Katie Mae Collins. She was the fourth of seven children. Her parents, grandmother (Bertha M. Jones), two sisters (Louise Cook and Delores Thomas) and two sons (William L. and Keith Hatch) preceded her in death. She attended Booker T. Washington Public School System in Elgin, Texas graduating high school in 1968. Shortly after graduation, Elois united in marriage with William Lee Hatch, Sr. To this union, three sons were born: William, Jr., Keith and Mark. In 1982, she united in marriage with John Harold Moorer. To this union, a daughter was born: JaKeisha. Elois had a great love for fishing, decorating, cooking and baking for her family and friends. Her deep compassion for children led to the start of a day care center in her home, Moorer’s Day Care, where she loved and nurtured a host of children for 31 years. She was affectionately called “Mama Lois,” not only by the children she cared for but also by their parents, other family members and friends. As a young child, Elois accepted Christ as her personal Savior and was baptized at Winn’s Memorial Baptist Church, Elgin, Texas. She remained a member throughout her formative years. After making Austin her home, she united with the Greater Love Baptist Church, under the leadership of Pastor Isaac Grant, Jr. She served on the Culinary Committee and was a member of the Choir. She loved her church and served faithfully until her health began to fail. She leaves to honor and cherish her memory: her husband of 37 years, John Harold Moorer of Austin, TX; son, Mark Hatch (Michele) of Leander, TX; daughter, JaKeisha Moorer of Pflugerville, TX; brothers, John D. Collins, Jr. of Austin, TX; Joseph Collins of Sacramento, CA; and Alvin Collins of Elgin, TX; sisters, Marva Wynn of Dallas, TX and Daffney A. Henry of Manor, TX; grandchildren, Andrew Hatch, Isobella and Amelia Johnson of Round Rock, TX; and William MarKeith Hatch of Leander, TX; daughter-in-law, Barbara Hatch Johnson (Elston) of Round Rock, TX; and a host of nieces, nephews, relatives and friends.

The family of Elois H. Moorer created this Life Tributes page to make it easy to share your memories.

Send flowers to the Moorer family.