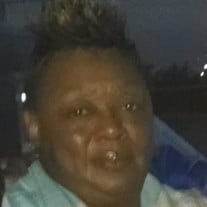 Elitha Louise Tasby was born to Lee Andrew Tasby and Joyce Louise Dallas Tasby on November 19, 1957. Affectionately known as "Litha" or "Jill" and she was also known for her blond hair. Elitha grew up in Austin and attended the Austin Public... View Obituary & Service Information

The family of Mrs Elitha Louise Tasby Byrd created this Life Tributes page to make it easy to share your memories.

Send flowers to the Byrd family.