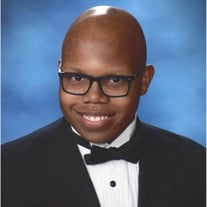 Draylen William Mason was born to Shamika Wilson and Mark Mason on May 26, 2000. From the time of his birth, he was attentive, curious and full of life; his exuberance was always unbound! Draylen accepted Christ as his personal Lord and Savior at the early age of six and was baptized at the Corinth Missionary Baptist Church. Draylen was an exceptional student talented musician and an overall "Renaissance Man." While he did not have a forte for traditional sports, Draylen mastered the martial arts and won numerous competitions and awards. His penchant for the performing arts began in elementary school where he participated in the Shakespearean Movement at Pease elementary. As eloquently stated by Draylen in his college application essays, "..music and the orchestra was the fire that fueled his life." His love for music was born at family gatherings where it was not uncommon for Draylen to perform and write songs for his Granny and Granddad or stand with the quartet with his great-uncles as they strummed the gospel on their guitars. In Draylen's words, "..I am a musical servant whose gift is to touch and convey the composer's feelings and message into my playing and to be one with the music. I don't know about you but, that is what I do!" Draylen was an artist of the stringed instruments and keyboards, composer, conductor, martial arts instructor and aspiring neurosurgeon. Though young, he pursued his life purpose with an effervescent fervor. His dedication to the arts and community service took him across the nation and around the world. He was the epitome of the spirit of excellence and he was loved by many for his kindness, sense of humor, and unique ability to touch all that he encountered. Draylen was accepted to attend college at the University of Texas at Austin, the University of North Texas, Hampton University, Howard University, and Oberlin Music Conservatory. Draylen's life was tragically taken on Monday, March 12, 2018. He leaves to celebrate his life and mourn his loss, his parents, Shamika Wilson and Mark Mason of Austin, his grandparents, Dr. C. Norman and LaVonne Mason, Sandra Young Jones, and DeWitt Wilson, his great-grandmother, Mildred Mason, his Aunt, Rashun Williams (Reginald) of Houston, TX and their daughter Nicole, his uncle Michael Mason; great aunts and uncles, Glady Clemmons (Ted), James Hardin (Beverly), Estella Hicks, Patricia Shelton (Nathaniel), Bruce Mason (Ester), Mary Pierce, Ronald Pierce, Min. James T. Stewart, and Ruth Washington. Godmother, Chaquann Bouyer, god-brothers, Darren Bouyer, Marcus Dodson, Kai Roberson and a host of, cousins, relatives and friends also mourn his loss.

Draylen William Mason was born to Shamika Wilson and Mark Mason on May 26, 2000. From the time of his birth, he was attentive, curious and full of life; his exuberance was always unbound! Draylen accepted Christ as his personal Lord and Savior... View Obituary & Service Information

The family of Draylen William Mason created this Life Tributes page to make it easy to share your memories.

Send flowers to the Mason family.