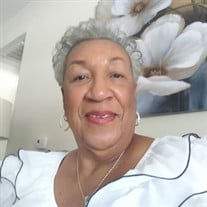 https://livestream.com/accounts/7325565/dorothyhardy Obituary “A light from our household has dimmed. A voice we loved has been stilled. A place is vacant in our hearts that can never be filled”. Dorothy Nell Reed Hardy was the 2nd child born to Geraldine (Dotson) Reed and Rev. Wilmon Matthew Reed. Dorothy departed this life on Sunday, February 27, 2022. Dorothy accepted the Lord Jesus Christ early in life at her father’s church, St. John College Heights Baptist Church in Austin, Texas. Dorothy grew up in Austin, Texas attended Blackshear Elementary, Kealing Jr. High School, and L.C. Anderson High School. As Dorothy grew to be a young lady, she loved to dress and took pride in the clothes she wore. Growing up in a household of 6, she often would dress her baby sister, Patricia, because she liked to shop, and they would go downtown shopping at JCPenney’s. Dorothy was a stylist dresser and took pride in everything she wore, being a tall lady. She loved to go to Luby’s, look at houses and watch people ride horses. Dorothy was united in holy matrimony to the love of her life, Cato Hardy Sr., an airman at Bergstrom Air Force Base. He wanted Dorothy to see the world through his military travels. To this union, three children were born: two sons, Cato Hardy Jr. (Cherry) and Tony Hardy deceased (Irene) and one daughter, Timberly Hardy Payton (Mark). Also, shared a wonderful relationship with three stepdaughters Vanessa Sheldon, Cheryl Tucker, Eartha Davis (Eddie). After leaving Bergstrom AFB Dorothy, Cato and their two boys spent 2 years at Hickam Air Force Base in Honolulu, Hawaii, followed by Blytheville Air Force Base in Arkansas, Wurtsmith Air Force Base in Michigan, and Fairchild Air Force Base in Spokane, Washington before finally retiring after 23 years at Lackland Air Force Base in San Antonio, Texas. Cato wanted to make sure the family would see the world…and they did. They raised the three children to see a broad view of the world and to respect the world, not what was in it. Dorothy made many friends along the way, loved, and remembered them all and would often reach back to cherish memories. Dorothy lived in San Antonio, but loved going home to Austin to be with family. She loved the history of the Overtons and Dotsons. Dorothy loved her grandchildren to no end; they were the world to her. She was known to them as "Mocha". Cato Jr. said "My Mom was like a second "mom" to all of my friends. They loved to conversate with her. Timberly said that Dorothy would call her four letter words that can’t be printed in the program (smile). Timberly’s oldest daughter is pregnant and Dorothy was looking forward to meeting the new edition to the family. Her name is going to be Kimberly Mocha Carter Lee. Dorothy also loved to see Jada dress. She also loved her nieces and nephews, but when she heard Byron, Bubba, Babaa Mark, Brendon, Dwayne, Tootie, Chick, Big Duke, Ace, Tony, Donnie, Isaac, Rod D, Tre or Devin’s names her eyes would light up. More so than anyone, she got excited talking about Rev. W.M. Reed, Geraldine Reed, her sisters and brother to the world everywhere she traveled. Dorothy will be welcomed in the gates of heaven by her husband (Cato Hardy Sr.), her mother (Geraldine Dotson Reed), her father (Rev. Wilmon Matthew Reed), one son (Tony Hardy), two sisters (Barbara Ann Reed & Helen Earline Reed), one brother (Donnie Reed), one niece (Sharon Denise Young), two nephews (Derrick Reed & Michael “Chick” Reed) and one great-niece (Monisha Shaw). Dorothy leaves to cherish her memories: one son, Cato Hardy Jr. (Cherry); one daughter, Timberly Hardy Payton (Mark); three step children: Vanessa Sheldon, Cheryl Tucker, Eartha Davis (Eddie); three sisters, Wilma Reed, Delores “BB” Ferguson, and Patricia Reed; one aunt, Robbie Overton; one great aunt, Izanetta Bryant; one brother-in-law, Isaac Hardy (Carita); one sister-in-law, Jeanette Hamilton; a very close cousin who was like a sister, Claudette N. Donald; twelve grandchildren; five great-grandchildren; and many loving nieces, nephews, and cousins.

https://livestream.com/accounts/7325565/dorothyhardy Obituary &#8220;A light from our household has dimmed. A voice we loved has been stilled. A place is vacant in our hearts that can never be filled&#8221;. Dorothy Nell Reed Hardy was the... View Obituary & Service Information

The family of Dorothy Nell Hardy created this Life Tributes page to make it easy to share your memories.

Send flowers to the Hardy family.