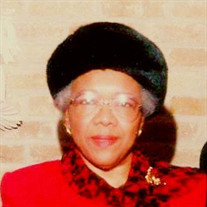 Sister Doris Louise Walker Shaw affectionately known as “Mother Shaw” was born to William J. B. Walker and Jimmie Mae Wheeler Walker on May 22, 1936 in Del Valle, Texas. She attended Blackshear Elementary, Kealing Junior High and was a graduate of the original L. C. Anderson High school in 1954. She met and married the love of her life, the late Reverend Samuel A. Shaw and to this 50 year union a very devoted daughter Deborah and son Samuel A. Shaw II were born. Doris loved to sew and pursued an Associate Degree in Tailoring from St. Phillips Community College in San Antonio, Texas. As a young lady Sister Shaw joined and was baptized at the Mount Olive Baptist Church, Austin, Texas under the pastorate of Reverend Herbert A. Sneed. After marriage she moved with her husband to San Diego, California where they joined the Mount Zion Baptist Church. At each duty assignment the family joined a local church and was active in various ministries. After their return to Texas they united with the New Mt. Pleasant Baptist Church under the late Dr. Reverend J. Carlton Allen in 1974. In 1984 her husband accepted the call to Pastor the St. Joseph Baptist Church where he served until his death. She later moved to Austin to take care of her mother and reunited with the Mount Olive Baptist Church under the Reverend Richard E. Carter. Sister Shaw served faithfully in various ministries most of her adult life. She took pride in being a member and officer of the Usher’s and Nurses Auxiliary at New Mt. Pleasant Baptist Church for 20 years. She held the office of Secretary of the President Council and President of Minister’s and Deacon’s Wives. When her husband was ordained as Pastor of the St. Joseph Baptist Church she was First Lady, she served as the sole member of the Usher’s Auxiliary until she recruited more members. After Sister Shaw returned to Mount Olive, she served as Assistant Recording Secretary of Mission I, Secretary of the Minister’s Wives Auxiliary and a member of The Grief Ministry. Sister Shaw was a military wife to her husband who served in the U.S. Navy for 20 years until his retirement. While living in San Diego, California she worked several years at the 32nd Street Naval Station as a computer operator. After the family’s move to San Antonio, Texas she continued her work in this field at Fort Sam Houston until she retired after 20 years. After retirement her community involvement included serving as a Travis County election worker and as Treasurer of the L. C. Anderson Class of 1954. An avid reader from childhood, Sister Shaw enjoyed reading her local newspapers to stay abreast of current events and especially sports. She was an avid fan of the San Antonio Spurs and tennis (more specifically Venus and Serena Williams). To celebrate her life’s legacy she leaves: One loving daughter, Deborah Shaw Boatner of Austin, Texas; One devoted son, Samuel Anthony Shaw, II and wife Jennifer of Dallas, Texas; four grandchildren, James L. Tinsley of Austin, Texas, Samuel Anthony Shaw, III of San Antonio, Texas, Jenee Stephens of Dallas, Texas and Clyde Stephens of Arkansas; two great grandchildren Jared L. Tinsley of Dallas, Texas and Jarmaine L. Tinsley of San Antonio, Texas; and a host of cousins, nieces, nephews, extended family and friends. These close friends and family will always remember and cherish their relationship: Gladys Williams and Dedurie Kirk of Austin, Texas. This quiet but determined woman of God will be truly missed by all who knew her. “Well Done Good and Faithful Servant – Well Done”

The family of DORIS WALKER SHAW created this Life Tributes page to make it easy to share your memories.

Send flowers to the SHAW family.