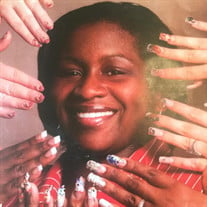 https://www.flipsnack.com/alcbf/copy-of-donie-rainey.html Donie Salice Torrance Rainey was born on February 8th, 1975, in Rockford Memorial Hospital in Rockford, IL to James and Carolyn Torrance. She accepted Christ at an early age under Dr. E.H. Gilbert and was a member of Pilgrim Baptist Church. Her family moved to Austin, TX in 1986, where she attended Robins Alternative School, graduating in 1993. She had a mind for business and knew early on that she wanted to be self-employed. She attended Round Rock Beauty School where she received her license as a Nail Technician. In 2004, she opened “Nails Naturally” Salon and Spa. Her clients will miss her dearly. She was married to Edward (Yahseim) Rainey. He will cherish their memories together forever. She was preceded in death by her father. Donie leaves to cherish her memories, her husband, Edward (Yahseim) Rainey; mother, Carolyn (Charles) Shavers; son, Phillip D. (Alexis) Torrance; one grandson, Atreaus Torrance— whom she adored; daughter, Eallyah Rainey; one brother, James (Christine) Torrance; sister, LeKenda (Darrell) Russell; half-sister, Coretta Williams; step-sister Stefanie Shaves; step brother, Harold Shavers; her paternal grandmother, Pearline Torrance; mother-in-law, Alice Harris, and a host of aunts, uncles, nieces, nephews, cousins, and friends.

The family of Mrs. Donie Salice Rainey created this Life Tributes page to make it easy to share your memories.

Send flowers to the Rainey family.