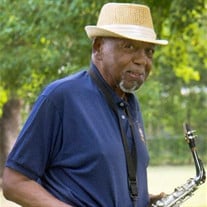 Desmond Earl (Des) Smith was the oldest of three children born to Reverend John Wesley Smith and Willie Mae Inglemon Smith. He made his entrance into the world on August 25, 1937, in Roxton, TX and departed on November 5, 2019 in Austin, TX. Desmond accepted Christ at an early age and was baptized by the Reverend D. Edwin Johnson at Sunset Baptist Church in Texarkana, TX. Desmond’s education began in the rural area of New Boston, TX in a one room country school. His mother, a teacher herself, saw the potential in Desmond and let him start school early. He completed Paul Lawrence Dunbar High School in Texarkana in 1954, before his 17th birthday. Although Texarkana was the home base for the Smith family, the children spent summers and some school time in Paris, TX with his maternal grandmother and aunt. While in high school, he played the E flat alto saxophone and continued his love of playing jazz and gospel music until God called him to play in His heavenly orchestra. After high school, he went to Oakland, CA where he joined the United States Air Force. He served for 11 years before returning to Texarkana where he was employed at Cooper Tire and served as president of the local union. After earning the bachelor’s and master’s degrees in business administration at Texakana College, he accepted a position with GTE in Houston, TX. His job was later moved to the Dallas area where he lived and worked until he retired from GTE in 19xx. His post-retirement work was in real estate in the Dallas Metro Area. While living in Arlington Des united with the Morning Star Missionary Baptist Church where he was a member of the male chorus and the sanctuary choir and faithfully played his saxophone to the glory of God. He loved his church and his pastor, the Reverend C. L. Taylor, and took every opportunity to work in the music ministry. Des never forgot where he came from. He was active in the Dallas Dunbar Alumni Association where he served was the founder, president and served in many other capacities. Desmond’s love for his church was matched by his love for his immediate and extended families. When anyone needed names or contact information about relatives on the Smith or Inglemon sides of the family, everyone knew that Des was the one to contact. When his health failed he moved to Bastrop, TX to be closer to his sister and her family. His mother, father, and brother Hugh Smith, preceded him in death. Those left to celebrate his homegoing are daughters—Diedre Stephens (Edmund), Humble, TX; Betty White-Williams (David), Hooks, TX; and Janice Colston—as well as two sons—Gary Smith, Cleveland, TN; and Elbert White, Henderson, TX. In addition he also left his beloved sister, Gwendolyn Smith; several grandchildren; two great-grandchildren; nieces; nephews; and many cousins and friends.

Desmond Earl (Des) Smith was the oldest of three children born to Reverend John Wesley Smith and Willie Mae Inglemon Smith. He made his entrance into the world on August 25, 1937, in Roxton, TX and departed on November 5, 2019 in Austin, TX. Desmond... View Obituary & Service Information

The family of Desmond Earl Smith created this Life Tributes page to make it easy to share your memories.