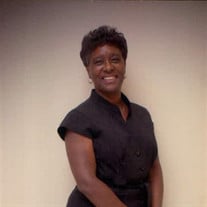 Deronza “Ronnie” Denette Patterson Greene, was born November 25, 1953 to Rosie Lee and Elbert Patterson in Lake Providence Louisiana. She confessed Christ at an early age and united with Evergreen Baptist Church where she was baptized by Reverend Stovall. The family relocated from Louisiana to Austin, Texas when her father, Willie Hines, Sr., received a military transfer to Bergstrom Air Force Base. Deronza attended Kealing Junior High School and graduated from L.C. Anderson High School, Class of 1971. She then went on to Austin Community College to study accounting, where she later became an instructor. Ronnie had an illustrious career in the banking industry. Having worked over 30 years for companies such as Lamar Savings, Capital Savings. Ronnie began her Mortgaging career with Temple Inland Loan and Mortgage Corporation as Vice President, Quality Control Division for over 20 years. She also worked for D.R. Horton Mortgage Company. Ronnie retired from Classic Bank, where she was the first African American female Vice President and Branch Manager of an approved FDIC banking institution in Bastrop, Texas. Her friendly disposition and warm personality invited into her life many endearing friends and loved ones. She was very active in numerous community service organizations such as the Boys & Girls Club of Bastrop, Texas, service as treasurer and later as board president; she was the co-founder of the Bastrop Debutante Club, a member of the Bastrop Chamber of Commerce and a member of the Bastrop Rotary Club. A member of the Old L.C. Anderson Alumni organization. She was also chairperson of the Mount Rose Missionary Baptist Church Pastor’s Aide Committee. Retlaw and Ronnie met in May 1986. They were married in Round Rock, Texas July 30, 1988 and remained so for 31 years. Their union was complete with their daughter Audra Chanel. Ronnie loved to travel extensively with her family that included her only grandson, Derion L. Scott. Ronnie was a city girl and when they decided to make the move to Cedar Creek, Texas it was with great trepidation. To the point that Ronnie believed in “piece be steel” and Retlaw ensured that she always possessed a piece of steel. However, being the lady and wife that she was, she stuck by her husband’s side and made ready for this adventure. Ronnie was the second child of four, her older sister Marcia Bowen, younger sister Linda Hines and baby brother Willie “June” Hines, Jr. She is preceded in death by her mother, Rosie Lee Hines; father Willie Hines, Sr. A lover of family, she is survived by her husband, Retlaw S. Greene, daughter, Audra Chanel Balque, grandson, Derion Scott; two sisters, Marcia Bowen, her namesake niece, Deronza Denette Sanders and Linda Hines; one brother, Willie “June” Hines; fie sisters-in-law, Alma G. McNeil (Willis), Marvel Wimberly (James), Linda K. Greene, Niffirg L. Greene Hastings, Abigail Greene; three brothers-in-law, Walter L. Greene (Nelia), Albert N. Greene, John H. Greene (Gina) a host of nieces, nephews, cousins and friends.

Deronza &#8220;Ronnie&#8221; Denette Patterson Greene, was born November 25, 1953 to Rosie Lee and Elbert Patterson in Lake Providence Louisiana. She confessed Christ at an early age and united with Evergreen Baptist Church where she was baptized... View Obituary & Service Information

The family of Deronza Denette Greene created this Life Tributes page to make it easy to share your memories.

Send flowers to the Greene family.