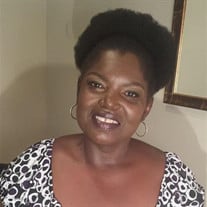 On February 20, 1960, Debra Grayson was born in Sebring, Florida to Beulah Mae Jenkins and Abraham Jenkins, Sr. She was their second child, born after Abraham Jenkins, Jr. and was followed by Pascal Lamar Jenkins (“Boo Boo”) and Roger Jenkins. In 1962, Beulah and Abraham parted ways. A few years later, Beulah met and eventually married Johnnie Sholtz II, who raised Debra side by side with Beulah from then on. Beulah and Johnnie had five more children together: Lynette, Russell, Johnnie, Marvin, and Benny. Johnnie Sholtz II also had other children who grew up with Debra: Brenda, Tony, Clifford, and Nathaniel. As the oldest daughter of a house full of children, Debra was like a second mom to her siblings, cooking for them, making sure they did their chores, and soothing them when they were upset. She was a delightful child who loved wearing the fashionable clothes her mother would sew for her. After graduating high school in 1978, Debra received the CAMP Scholarship (College Assistance Migrant Program) to attend St. Edward’s University in Austin, Texas. It was at St. Edward’s where in 1979 she met John Grayson, the sweet, always smiling man who would become her husband. While in college, Debra enjoyed socializing with her many friends, dancing, getting dressed up, and enjoying the exuberance of her youth. In November 1983, Debra and John had their first daughter, Kaneisha Grayson, and in November 1989, they had their second daughter, Tameka Grayson. Debra served as a confidante, cheerleader, and rock of certainty for her daughters as they passed through milestones of adolescence and womanhood such as Tameka becoming a mother in 2012, Kaneisha’s wedding in 2015, and Tameka’s purchase of her first home in 2017. Debra graduated from St. Edwards with a Bachelors in Business Administration in 1987, and continued her career at Texas Rehabilitation Commission (TRC). Over a 20+ year career at TRC, Debra made dozens of friends and earned a reputation as the dedicated decorator and party planner for work celebrations, weddings, quinceañeras, and many other festivities and events. Debra was an outgoing, compassionate person committed to easing the loneliness and suffering of others. She frequently volunteered with the nonprofit Brighter Bites as well as fed and visited homeless individuals around Austin. She loved visiting her elderly friends, making sure they knew they were still loved and needed. In 2013, Debra gleefully retired. Over the next four years, she frequently shared photos and stories of her post-retirement adventures such as traveling with her friends, gardening, upcycling furniture, whipping up delicious creations, and spending time with her twin grandsons, Dayln and Tyre, whom she affectionately referred to as her “twinkies.” During her retirement, Debra’s love for children brought her to be a substitute teacher at Casey Elementary, where she touched many hearts by passionately teaching and helping bring laughter and learning to her students and fellow coworkers. On February 8, 2018, Debra passed away in her home, surrounded by her husband, her daughters, and their two dogs. Even in her last moments, she was thoughtful. Debra waited until her two daughters were able to make it back home to her side before officially passing on. Debra Grayson was the life of the party, the belle of the ball, the social butterfly, and the laughter that rang through the halls of every room she encountered—whether at work, a party, or at home. She will be reunited with her late brothers Russell Sholtz, Johnnie Sholtz III, Marvin Sholtz, Abraham Jenkins Jr., and Roger Jenkins. She leaves to cherish her loving memory her husband John Grayson, her daughters Kaneisha (and husband Damipi Bigou-Lare) and Tameka Grayson, grandsons Dayln and Tyre Jones, father Abraham Jenkins Sr., mother Evangelist Beulah Mae Sholtz, stepfather Johnnie Sholtz II, sister Lynette Sullivan, brother Pascal Lamar Jenkins, brother Benny Sholtz, sister Tahisha Miller, and brother Lamine Miller. She will also be cherished by her many nieces, nephews, cousins, in-laws, students, and hundreds of fabulous friends.

On February 20, 1960, Debra Grayson was born in Sebring, Florida to Beulah Mae Jenkins and Abraham Jenkins, Sr. She was their second child, born after Abraham Jenkins, Jr. and was followed by Pascal Lamar Jenkins (&#8220;Boo Boo&#8221;) and... View Obituary & Service Information

The family of DEBRA LOUISE GRAYSON created this Life Tributes page to make it easy to share your memories.

Send flowers to the GRAYSON family.