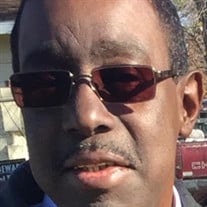 Darryl’s Story Darryl Wayne Roberts, at the age of 54 slipped away peacefully Saturday June 24, 2017 among family and friends. In Darryl’s positive nature in learning of his diagnosis with stage IV lung and brain cancer, his faith in God never wavered and continued to stand strong for his family and fought courageously to the end. Born to Clyde Eugene Evans Sr. and Mary Louise Roberts on February 8, 1963. Mary later married Henry (Duke) McKinley and they raised Darryl from the age of three. He attended Austin public schools, Oak Springs and Ortega Elementary, Allan Middle School, Johnston High School and then graduated from Del Valle High School in Del Valle Texas. He was very passionate about sports he played from little league to high school. He continued to follow his passion of sports through his son. He and his family traveled around the country with him, and Darryl always seem to find a way to get put out of many games debating referees calls. Darryl became very well known by all the officials. He loved hanging out with his homeboys drinking Mickey’s, playing dominoes, but his main thing was basketball and football talking about how good he was from the Hornets thru high school . He would always say the reason he didn’t join the Army was because he would have to go in as a private and everything he did he was always the captain. I was captain of the football team, basketball team, track-- whatever the sport was it didn’t matter. Darryl was known for telling you like it was and you didn’t have to wonder what was on his mind, because he would tell you flat footed and to the point, using a choice of colorful words. The two main women in his life were his wife Dorraine Roberts and his mother Mary Mckinley to whom he loved unconditionally. He once told his mother-in-law Lucy Zachary, “thank you for having your daughter for me”. He also loved his children and grandchildren and would talked with them about the importance of their education, work ethic and what they could achieve in life if they would apply themselves. Darryl worked for the City of Austin for fifteen years until his health failed Later in his life he confessed his faith in Christ and became a member at Eastside Baptist Church and was baptized by his Pastor, Rev. Leland Dandridge on May 31, 2009. He united in holy matrimony on January 8, 1988 to his loving and devoted wife Dorraine Roberts of 29 years. To this union two children were born, Precious Sherelle Patrice Roberts and Darryl Sharod Roberts Sr. Darryl is preceded in death by his Paternal grandfather and grandmother John Evans Sr. and Ivory Evans. Paternal Father Clyde Eugene Evans Sr. Uncle John Evans Jr., Maternal grandfather and grandmother Ellis Roberts Sr. and Cora Roberts, his Aunt Ola Roberts, Uncle Ellis Roberts, Step Grandfather and grandmother Greely (Shorty) McKinley Sr. and Alma McKinley, Step Father Henry (Duke) McKinley and Uncle William “Jim” Whitley. Darryl is survived by his wife Dorraine Roberts, children Precious Sherelle Patrice Roberts and Darryl Sharod Roberts Sr., Shanee Deshaun Roberts and Jamal Roberts, Mother Mary Louise McKinley, brothers Aaron (Plunka) Eugene McKinley, Clyde Eugene Evans Jr., Corey Evans, Christopher Evans, Sisters Cheryl Yevette Jeffries (Eric), Claudia Lane (Norris) and Shannon Strong. Aunts Pat Roberts Whitley, Cheryl Alexander (Gerald), Paula East, Willie Fisher, Florence Cabin and Elisa Justice. Uncles, Don Ates (Gail), Edward Roberts, Greely (Stein). Father and mother in law Leo Zachary (Lucy), brothers in law Leo E. Zachary, Craig Zachary, Sister in law Cynthia Scott (Roosevelt). Grandchildren, LaTrayvian Jamal Roberson, Vincent Jamal Roberson, Zariah Mon’ee Roberson, Anthony Jamal Roberson, Darryl Jamal Roberson, Noah Courtise Owens-Roberts, Darryana Sharae Roberts, Darryl Sharod Roberts Jr., and Jayda Roberts. Host of nieces and nephews, family and friends.

Darryl&#8217;s Story Darryl Wayne Roberts, at the age of 54 slipped away peacefully Saturday June 24, 2017 among family and friends. In Darryl&#8217;s positive nature in learning of his diagnosis with stage IV lung and brain cancer, his faith... View Obituary & Service Information

The family of Darryl Wayne (Wally) Roberts created this Life Tributes page to make it easy to share your memories.

Darryl Wayne Roberts, at the age of 54 slipped...

Send flowers to the Roberts family.