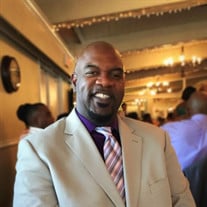 https://livestream.com/accounts/7325565/darrylatwood Darryl Lamont Atwood was born on January 8, 1966 to Lois Walker and Andrew Atwood in Austin, TX. After graduating from Sidney Lanier High School in 1984, he went on to study computer science at Southern Methodist University (SMU) in Dallas, TX. Darryl then transferred to Western Kentucky University where he played collegiate football for two years. In 1984, Darryl met Jacqueline Lawrence. They wed in 1989 going on to have only one child, Crystal Atwood. Darryl was no stranger to hard work. He worked at Motorola as a warehouse supervisor for ten years; various industries for a number of years; at the time of his passing, he worked at Applied Materials. Darryl was a strong and loving man, aptly described as a gentle giant by those who knew him. His family meant more to him than anything else in the world, something he often mentioned. He was unendingly proud of his daughter Crystal and always tried his best to support her. Darryl was also passionate about bartending and could often be found concocting new drink recipes for his friends either at home or social gatherings. Anyone who knew Darryl knew that he was the most loving father, son, friend, nephew, and cousin that any family could ask for. He was quiet in many respects, but his laughter would fill up any room. Darryl loved his aunt’s home cooked soul food, barbecue, and pecan pie. Darryl departed this life on August 31, 2021 at the age of 55. He was predeceased by his mother Lois and brother Michael Atwood. He is survived by his daughter Crystal, father Andrew, step -mother Lois Atwood (née Marshall), step -sister Miracle Reed, step -brother David Fingers, their families, and a host of aunts, uncles, and cousins.

https://livestream.com/accounts/7325565/darrylatwood Darryl Lamont Atwood was born on January 8, 1966 to Lois Walker and Andrew Atwood in Austin, TX. After graduating from Sidney Lanier High School in 1984, he went on to study computer... View Obituary & Service Information

The family of Darryl Lamont Atwood created this Life Tributes page to make it easy to share your memories.

Send flowers to the Atwood family.