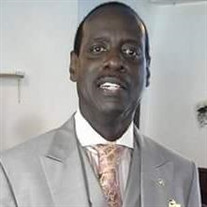 Deacon Clement Jones, Sr., was born October 8, 1951 in Carver Heights, Maryland to Essie Lee and Charles Jones. The family later moved to Texas where he attended Bastrop High School. After attending high school, Clement joined the U.S. Army and served his country. Upon the completion of his tour of duty, he returned to Texas where he worked construction. Is favorite employer was Austex Construction, where he met Jerry Acosta, who became his longtime friend. April 5, 1994, was the best day of his life, as told by him. This was the day he was joined in holy matrimony with the love of his life, Freddie Powell. They were together for many years and celebrated many milestones together. Deacon Jones professed his love for Jesus Christ early in his life. For over 20 years, he served at the Little Zion Baptist Church in the big city of Manor, Texas. During his tenure at LZBC, he started at the door ushering with his wife and family. He served as President of the Brotherhood and was lead singer with the male chorus. On October 8, 2011, he was ordained as a Deacon of LZBC. This was a role that he loved. He loved serving the church, working with the brotherhood, and all of the auxiliaries. He thoroughly enjoyed lending a hand where ever he was needed. Deacon Clement Jones was preceded in death by his loving parents, his sisters Mary Woods and Linda Washington, and his brother Robert Jones. He leave to cherish his memory his beloved wife, Freddie Jones. His three children. Son, Leonard Jones of Lockhart, Texas. Son Clement (Gayle) Jones, Jr. of manor, Texas. Daughter, Michelle (Alfred) Hinton of Manor, Texas. His brothers and sister Charles (Theresa) Jones, Cleve Jones, Eudell Jones, and Clementine Hoskins. He also leave to treasure his memories his grandchildren and great grandchildren, a host of nieces, nephews, cousins, other relatives and numerous friends.

The family of Clement Jones Sr created this Life Tributes page to make it easy to share your memories.

Send flowers to the Jones family.